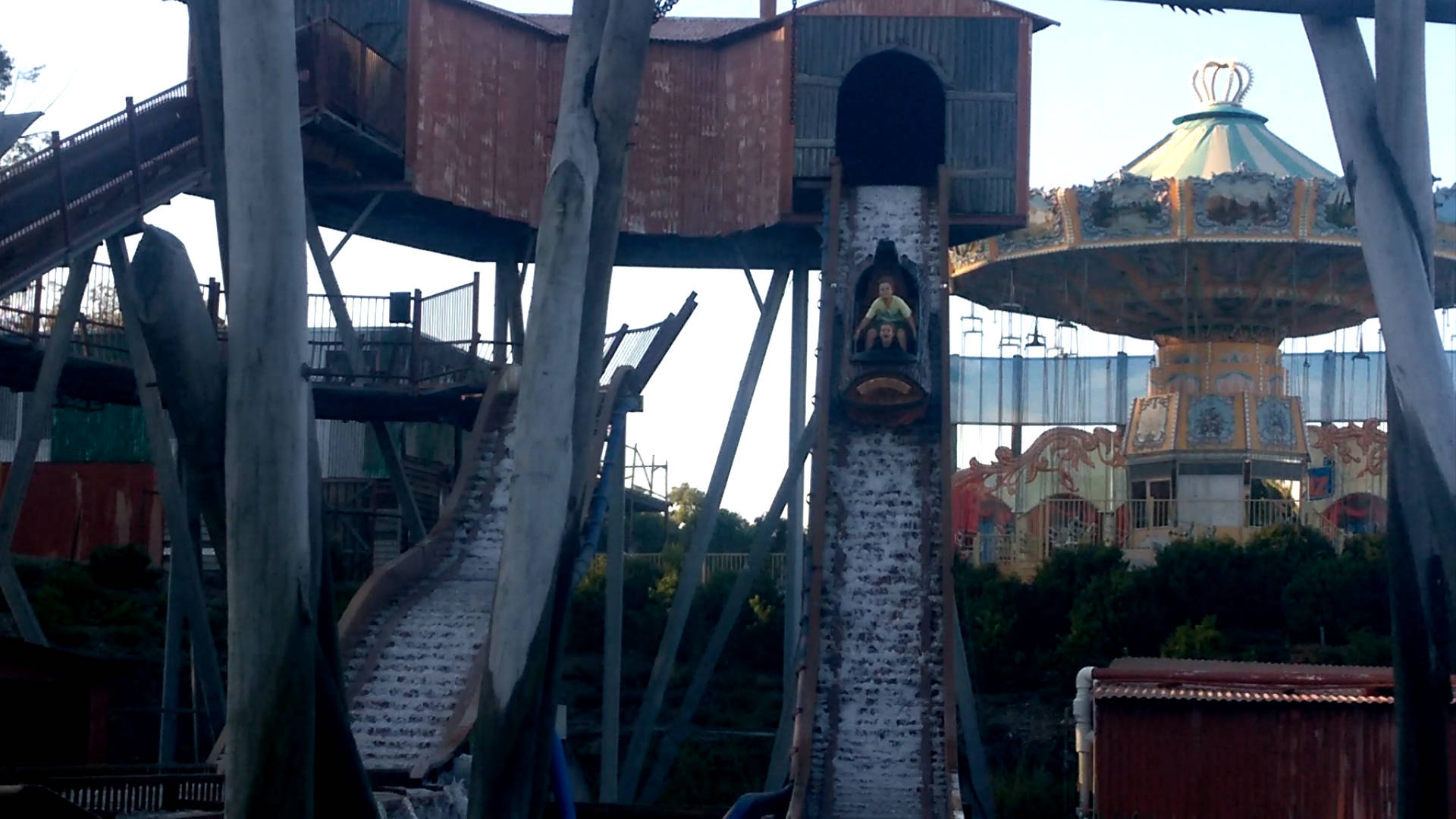 Aussie World is a family oriented theme park at Palmview on the Sunshine Coast, north of Brisbane. The rides include older traditional rides that you may find at showground rides, and newer rides that have been introduced in the last few years.

I have two boys Jack and Daniel, 11 and 7 at the time we went to Aussie World. We went on most of the rides, with the exception of a couple of rides that they were too small or young to go on. Dark Rebel has a minimum height of 130cm, and Mayhem Maze has a minimum age of 12. A height of 100cm will get you on most of the rides, sometimes requiring to be accompanied by an adult. Smaller kids are catered for when accompanied, with some rides available for any age. 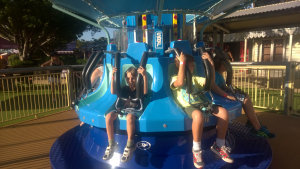 The boys favourite rides were the Bombora Bounce, sitting outwards it shoots up in the air, then bounces down and back up again, while spinning around. Jack and Daniel were able to go on this ride by themselves, so I spent a fair bit of time watching from a nearby table and chairs.

Close by is the Mozzie Musta, a favourite of Daniel. The ride spins around and goes up and down a ramp as it goes around. The car you are seated in spins on its own axis and magnifies the g-forces when it spins faster. Daniel would yell in fear when the car spun around quickly but wanted to go straight back on again when the ride stopped. He didn’t want to ride by himself, so I got to ride this one a few times. It reminded me of the more adventurous showground style rides 30 years ago.

The Giant Slide is a, well, giant slide. You grab a hessian mat and walk up the stairs beside the slide. Once at the top, you are directed to take your seat (on the hessian mat), and race to the bottom. It is a simple ride and enjoyed by the boys. Walking up the steps multiple times in a row was a little taxing on energy, however, that can be a good thing to wear out the kids.

Jack and I tried out The Wasp on a return visit, which had opened the previous weekend. Sitting on a two-person pod, the ride spins around with the pod swinging outward away from the ground. By pressing a button between the seats, the pod swings out further and higher up.

The Voyager Simulator is a motion ride simulator. I remember these when I was young as being revolutionary. Today the screen is probably smaller than many have as their normal television. The Voyager is a pod that seats about a dozen people or so. You choose from a list of different rides, and as you watch the ride from inside the pod, the pod moves around, throwing you from side to side, and front to back. We’ve done about 4 or 5 of the 17 rides you can choose from. 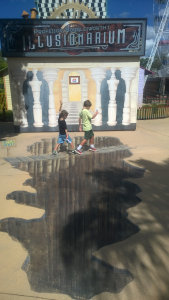 We went through Professor Bogglesworth’s Illusionarium a couple of times. You walk through a series of rooms with different illusions. Try to find the right door to exit from, mirror maze room, spinning room, and more.

When you are ready for a meal, Aussie World has a café with hamburgers, hot dogs, fish and chips, wraps and rolls, and of course ice-cream. You don’t have to stay in the park to get a meal. If you feel like something different from fast food style lunches, such as a steak, the pub is right next door and have lunch specials. Or you can walk to one of the food outlets nearby, and re-enter Aussie World when you are done.

Rides and attractions include the following:

The park doesn’t have the big park feel of the parks on the Gold Coast, instead, it is more family oriented and caters for children. Adult tickets are at children’s prices, and cheaper for concession – it lets Nanna come along to join in but not necessarily go on the rides.

When we were there near Easter, Aussie World had an activity for kids to find rabbits around the park and write down the colour of each, to then go into a draw for an Easter prize. Jack and Daniel were right into it, a couple of times I had to remind them we were there to go on some rides too, not just look for rabbits. My kids weren’t the only ones excited when they spotted another rabbit.

Exit the Bruce Hwy at exit 190, 1km north of the Caloundra exit. The entry to Aussie World is 1.2kms from the exit.

If coming from the north, exit the Bruce Hwy at exit 190, turn the first right into Glenview Rd, and continue straight ahead into Aussie World.

Food: Café, also pub and other food outlets outside of the park