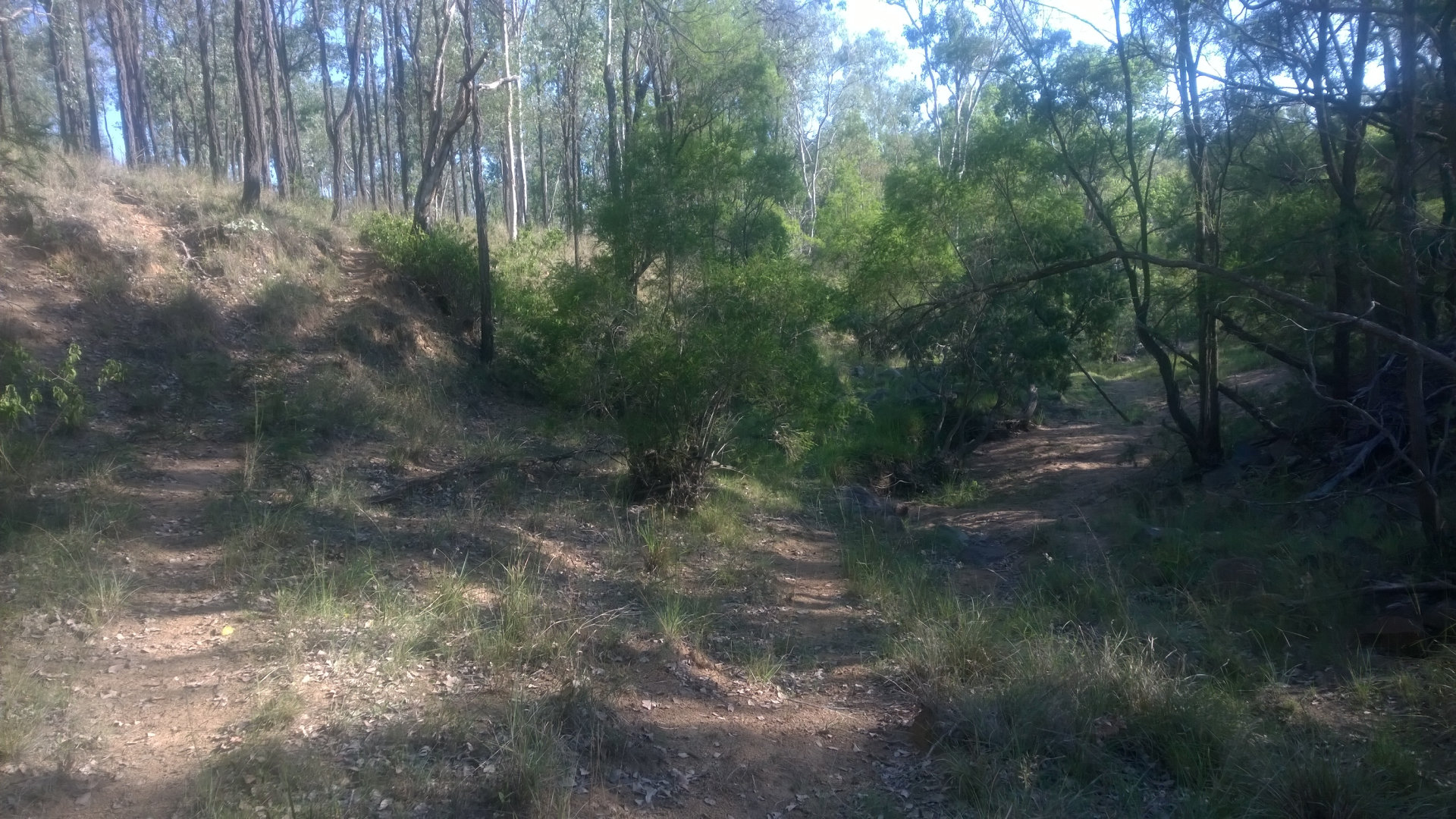 Seven Mile Diggings is an old gold fossicking area, with most of the mining taking place from 1876 to 1900. The population grew to include 700 miners, many of them Chinese.

There wasn’t significant amounts of gold found in the area, but alluvial gold can still be found. I have found mentions of garnets and rubies, but nothing definitive.

Camping is allowed at the top of the track that leads down to Yarraman Creek. Permits must be attained for either camping or fossicking from the South Burnett Energy and Information Centre in Nanango.

The track was accessible by 4wd. While it is physically accessible, driving down the track is no longer permitted, even with permission from South Burnett Energy. The track has been deemed unsafe after floods and there is no desire for repairs to make it safe.

It is a shame as it looks to be a good track to drive on (and for trained drivers, it doesn’t appear to be unsafe). A permit or access only through a reputable 4wd club would be beneficial to keep this area a place people are likely to visit.

7 Mile Diggings is a destination I have wanted to go to for some time, having heard it was a good trek along the old coach road from Blackbutt through to 7 Mile Diggings. A flood made a river crossing impassable years ago, and more recently a private property that needed to be passed through stopped allowing public access. 7 Mile Diggings was still accessible from the Nanango end. Around 2017 (I can’t find the date it happened) access by vehicle has been denied.

You can still walk down the track and have a look around, or try your luck in fossicking for some gold. Digging holes can be seen on the walk down and around Yarraman Creek. Part way down the hill is the remnants of a rusted bus, used by a prospector who was rumoured to be looking for rubies.

On the other side of the creek, walk downstream and you will reach the old coach road.

I found there isn’t a lot to see, and without permission to drive down to the creek any longer, the area will eventually become harder to access. The area at the top where you can camp with a permit isn’t too appealing unless you want to cart your camping gear down the track on foot. Apparently, there are better places to go for fossicking too. Sadly Seven Mile Diggings may become an obscure part of Australian history.

I asked for clarification on access to Seven Mile Diggings from South Burnett Regional Council and received a response by email. While the Infrastructure Department are in discussions as to the future plans of the area, South Burnett Regional Council have officially closed access to both Seven Mile Diggins and the Old Coach Road to all traffic, including 4wd and smaller vehicles. Parking at the entrances and walking through them are permitted.

as one of the trips going through Seven Mile Diggings and the Coach Road, however, this was achieved through discussions with the council and private property owners for a special event.

From the D’Aguilar Hwy on the south end of Nanango, turn into Arthur St E at the brown sign for 7 Mile Diggings. After 600m turn left into South St. South St becomes Old Esk N Rd, keep following for 10.5km. At this point, you will see signs prohibiting continuing with motor vehicles. To the right is where camping is allowed, and the top of the track that leads down to Yarraman Creek. If you need 4wd you have gone too far.

The road is gravel for the last 2kms, and you will cross a cattle grid. Continue straight ahead after crossing the cattle grid.