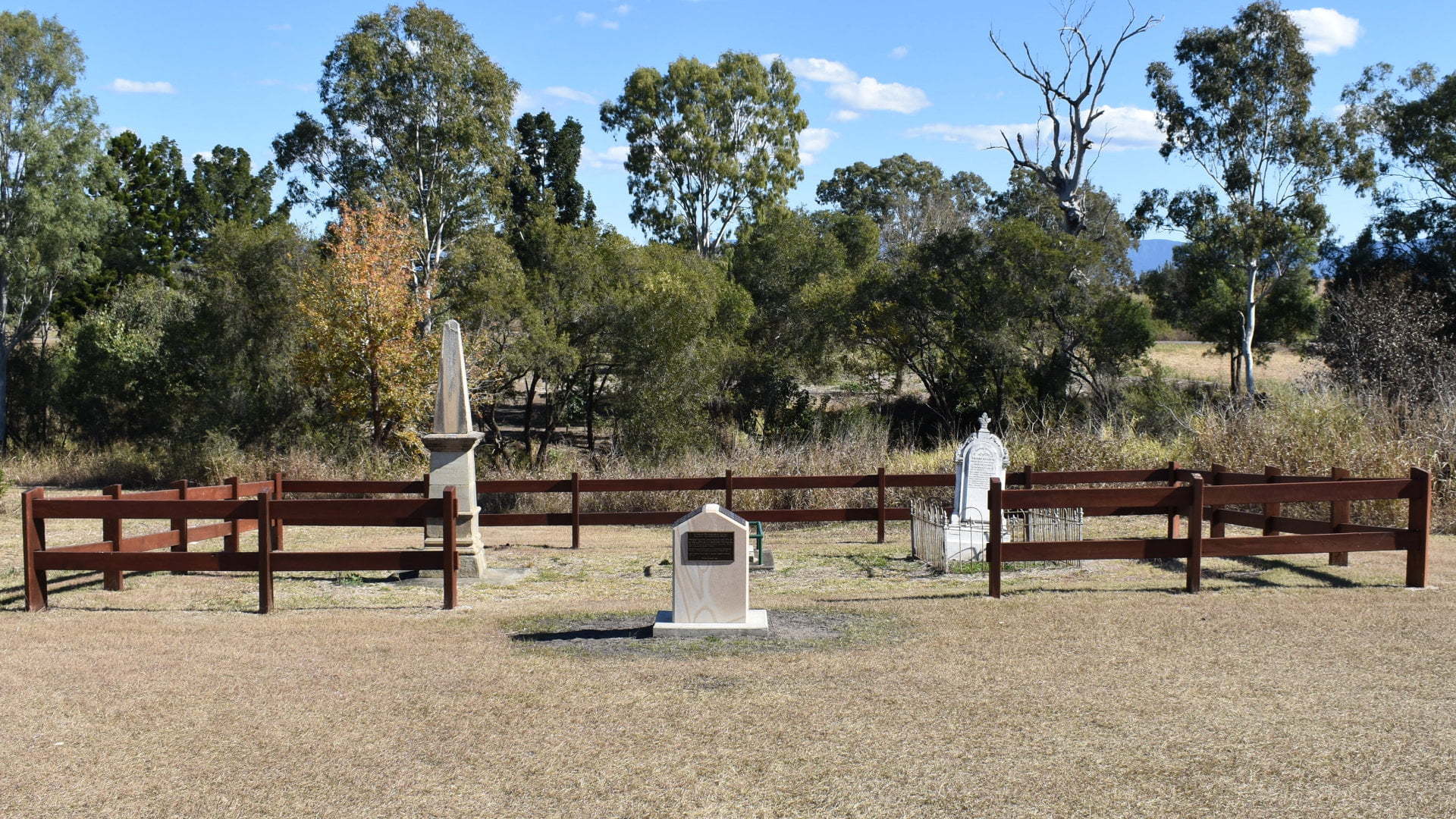 The Pioneer Graves are three graves of pioneers in the Fassifern area, Alexander Balbi, Sarah Campbell Mercer, and Anders Nielsen.

A monument in front of the graves provides information on the pioneers and of the area’s history. The front of the monument reads:

The beautiful and fertile district of Fassifern was discovered by Captain Patrick Logan on 10 June 1827. The early roads and halting places between Moreton Bay and the Darling Downs through Cunningham’s Gap (1828) and by the old Warwick Road through Spicer’s Gap (1847) were vital to settlement. A bush Inn was built here in 1846 on the site of what was to be the town of Fassifern.

This pioneer cemetery adjoined the Bush Inn and here the Boonah Shire preserves the memory of the brave and steadfast men and women of those early days.

Erected by the Royal Historical Society of Queensland in association with Boonah Shire Council.

On one side of the monument contains the following:

Allan Cunningham explored and named the Darlin Downs in 1827 and saw a gap in the range which could be used to communicate with the port at Brisbane (then a convict settlement under Captain Patrick Logan). This gap is now called Spicer’s Gap. The following year, 1828, he sailed to Brisbane and explored this area with Captain Logan and Charles Fraser Cunningham explored what is now called Cunningham’s Gap. Cunningham’s Gap was very steep and rough so in 1847 the road was opened through Spicer’s Gap instead.

In June 1846, John Perryman built the Bush Inn which was located on the rise just above these graves. A town was surveyed in 1856. The town was never established, however for many years there was a Telegraph Receiving Office (Post Office) located at the top of the nearby hill. Mr Madsen was the Post Master and Mrs Mavis Keinhans was one fo the last people to work there before it closed on 12 May 1950. A town wsa established about 8km away, first named Engelsburg and renamed Kalbar during World War I.

On the other side of the monument, information on the pioneers’ graves are shown:

Alexander Balbi (1823-1867) came from Malta. He took over the Bush Inn at Fassifern in 1856 after Frank Dawson Mercer. He also owned the Half Way House Hotel at Clumber near Spicer’s Gap. He died 19 April 1867 aged 44. His wife Margaret (nee McDonald) (later married to John Anderson) lived the rest of her life in this area, dying on 15 April 1916.

Sarah Campbell Mercer (4 April 1854 – 8 February 1855) (please note the dates on the headstone are significantly weathered) was the child of Frank Dawson Mercer and his wife Hannah who were the inkeepers at the Bush Inn at Fassifern. She was born at Kangaroo Point in Brisbane where her father was an innkeeper.

Anders Nielsen (1854-1887) came from Denmark. In Australia he became a bullock-driver. He acquired land in Maryborough, Toowoomba and Fassifern. During the disastrous floods of 1887, he swam across the flood waters with food for people stranded on surrounding hillsides. Only three weeks after this gallant effort he developed appendicitis and died, unable to reach medical help.

The stone on Sarah Campbell Mercer’s grave reads “Why do we mourn departing frn or Shake at death’s alarm. Tis but the Voice that Jesus Sends, to call them to his arms”

The headstone on Anders Neilson’s grave reads “In the midst of life we are in death. With mercy & with judgement my web of time he wove, and aye the dews of sorrow were lustred by his love; I’ll bless the hand that guided I’ll bless the hard that planned. When throned where glory dwelleth, in Immanuel’s land.”

There is plenty of open space at the Pioneer Graves, but there are no facilities.

From Cunningham Hwy heading north from Aratula, at the brown sign for Historical Museum turn right into Boonah Fassifern Rd, or heading south from Warrill View turn left. After 250m along Boonah Fassifern Rd turn left into Muller Rd. Continue along Muller Rd for 500m with the Pioneer Graves straight ahead before the road bends to the right.

Wheelchair accessible: Yes, however, assistance may be required or park close to the graves

Pets: Yes, on a leash