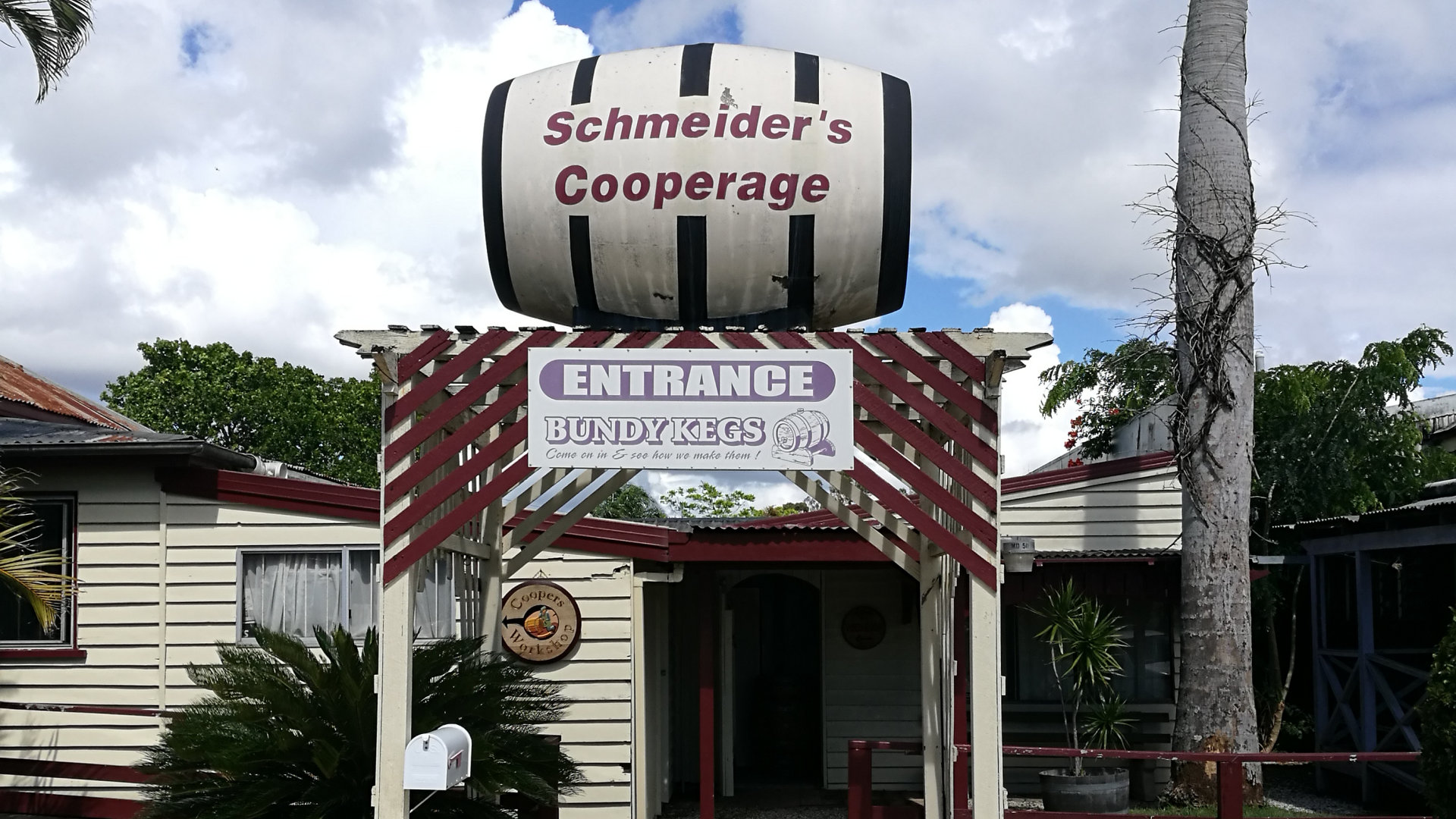 Archive: This location is no longer in operation. Schmeider’s Cooperage, operating as Bundy Keds, have moved to Hill St. Head to Bundaberg Rum Distillery

and Bundy Kegs are on the right when you turn into Hill St.

Schmeider’s Cooperage is not far from the Bundaberg Rum Distillery

, just up the road. At the entrance of the main building you walk into the shop, where there are various things made from wood, lathed, carved, and of course kegs. It’s now called Bundy Kegs, but the Schmeider’s Cooperage name is still displayed and is what is shown on the brown sign.

To the side is a viewing window where you can watch the process of the kegs being made. Outside there is a room where you can watch a video of how a keg is made. The room also has artefacts of cooperage, and a keg made for the replica HMAS Endeavour which was launched in Australia’s bicentennial year 1988. The keg was made to the same design used by early ocean explorers, so they don’t topple over when in lifeboats.

I had wanted to visit Schmeider’s Cooperage for many years, passing the brown signs when dropping into Bundaberg Rum Distillery to replenish supplies of rum liquor. I was a bit disappointed though. We arrived at 9am, and maybe that was part of our problem, but by 9.30am nothing was happening to see how the kegs were made. We had asked about if kegs were going to be made, and a question was asked behind the counter. Yes, they will be, but no information further than that. We settled in on the stools and waited, before deciding to look at the video presentation first when all we were seeing was getting prepared, such as cleaning the work area. When we came out from watching the video, no one was there for making kegs.

Schmeider’s Cooperage has potential, but it needs something so you know you can see something of the creation of the kegs. Perhaps a schedule for the various stages. Some more interaction with us would have been nice too. Just simple “welcome folks, where are you from”, but we didn’t have any dialogue with the guy who makes the kegs. The person cleaning the shop area spoke to us.

Is it worth going there? If you haven’t already been and are already going to the Bundaberg Rum Distillery, then yes, I’d drop in to have a look. It doesn’t cost anything to go in and have a look around, including going to the video presentation room and things on display. I’d also try to get there a little later, maybe 10am, so they’ve had time for opening and preparation. 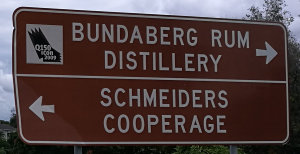 From the main part of town in Bundaberg, head east on Bourbong St. Bourbong St becomes Scotland St, before coming to a set of lights. Turn left at the lights into Princess St. Take the next left into Cross St, and immediately right into Alexandra St. Bundy Kegs is on the left.

Seating: Yes, to observe making of kegs, and in video presentation room