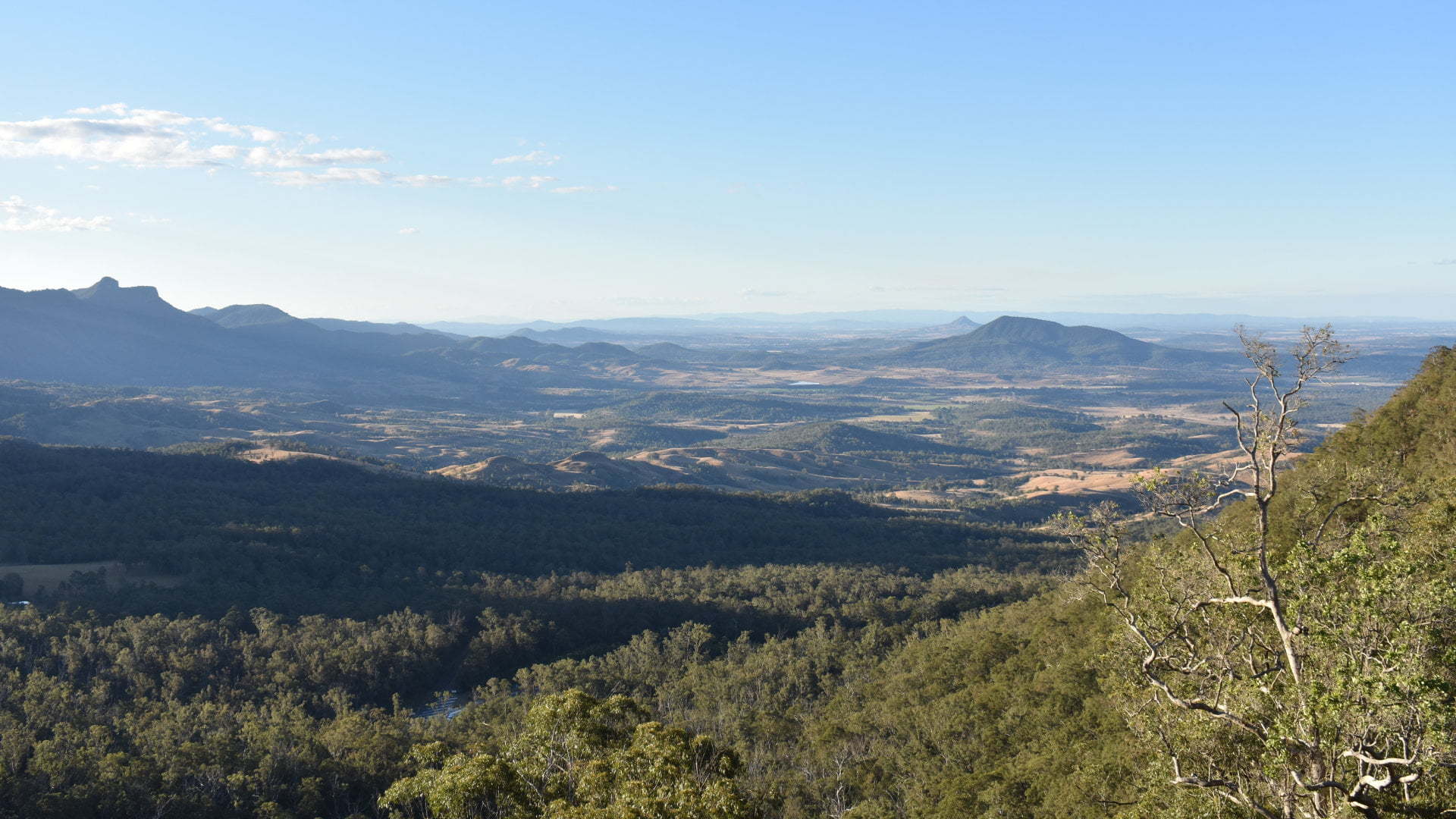 Spicers Gap is a pass over the Great Dividing Range, found in 1847 by a stockman as an easier route to Cunninghams Gap which proved to be too steep for regular travel.

A major road through Spicers Gap was built in the late 1850s through to the mid-1860s, though its use declined not long afterwards when the railway opened through to Toowoomba in the early 1870s. A more direct route through Cunninghams Gap was established in the 1920s taking over from Spicers Gap as the main pass.

As the first safe and trafficable route over the range to the Darling Downs, Spicers Gap was used by bullock teams to pull drays laden with wool to Brisbane and return with supplies for the settlers of the Darling Downs. It is no longer open to traffic, protecting it from erosion caused by vehicles and preserving the road’s historic value.

is the northern-most section and Queen Mary Falls

is the southern-most section. Spicers Gap and Cunninghams Gap are in the middle.

There are five walks at the Spicers Gap section of the Main Range National Park. One of those is Governors Chair

, which has its own brown sign. See Governors Chair page to find more information on that walk.

The 1.6km Heritage Trail, 3.2kms return, is accessible from either end. Starting from near the Governors Chair walk is the more accessible end for 2wd vehicles. The walk can also be continued on with the Mount Mathieson trail leading to the Spicers Gap camping area, or even part way for a longer return walk.

The trail starts off uphill for the first kilometre, then flattens out with a few up and downs. The track is wide, seeing that it was built as a road. The trail surface is generally flat, however, large stones of the road construction make it uneven underfoot in parts. While the Heritage Trail is a little steep at the start, overall the walk is fairly easy.

Information signs are located along the walk at key points demonstrating the road’s features, describing the back-breaking work. Large stones were broken down with hand-held sledgehammers and packed into the road by hand. The metal rims of wheels running over the road eventually created powder to cake between the smaller stone forming a hardened road.

On steeper slopes, the roadway is cut into the hillside to form a benched road. The excavation material is used as fill for the downhill side of the road and quarries provided stone for building the base of the road. 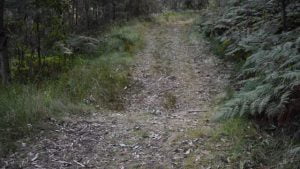 Whoaboys are used along the benched roads on the side of the mountain. Whoaboys are a diversionary embankment to direct water from the high side of a road and into a drain to slow the water flow and reduce erosion. The name ‘whoaboy’ is thought to be derived from the driver’s command to the horses approaching the banks.

Mud caused problems along the road. Corduroy, where logs were laid side by side to form a solid foundation, was used at boggy sections on the road. Legend speaks of a man’s head and hat sticking out of the mud had been rescued stated “when you have picked me out, remember my horse is down below’. 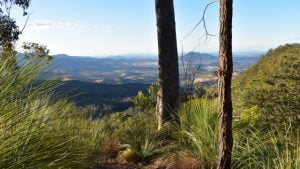 The Mount Mathison Trail is 8.1km return starting from opposite the Pioneer Picnic Area near the Spicers Gap camping area. The trail is not officially graded and roughly marked. Some sections are steep and narrow with the trail right on the edge.

The first part is the most difficult, getting to the peak of Mt Mathieson and then crossing the saddle to the next peak. The rest then becomes easier and safer, ending at the western end of the Heritage Trail.

To do the walk as a 7.8km circuit, continue along the Heritage Trail to the Governors Chair parking area, then walk downhill on the road back to Spicers Gap camping area passing the short Moss’s Well walk along the way.

I considered doing the circuit walk, having walked the Heritage Trail from Governors Chair, however, it was late in the afternoon and the sun close to setting when I was at the point to cross the saddle to the Mt Mathieson peak. Without being familiar with the hardest section of the walk, and likely having to walk back up the road to Governors Chair in the dark, I thought it best to return via the Heritage Trail which would be easier and safer.

The western part of Mount Mathieson Trail had its rewards, even if I didn’t reach the main feature of the walk. The track is narrow but generally with a few ups and downs until you start descending the saddle. 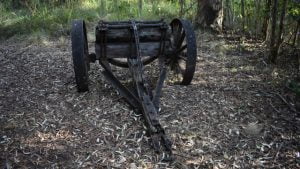 Along the way, the vegetation changes a few times. Starting with eucalypt forest, open grass field, and dense scrub vine forest. An old timber jinker used for hauling timber by bullock team is along the track, a remnant of the timber industry logging the area for over 70 years. After the scrub vine forest, the track starts to descend quickly.

If you intend to return before crossing the saddle, it is still worth going down until there is an opening with views across the western escarpment, however, it is very steep. As a comparison, Strava recorded a grade between 2% and 10% walking up the Heritage Trail, while the descent for the saddle was recorded as between 10% and 40%.

, Moss’s Well is a short 60m walk from the road through a tall forest.

Edward Moss was contracted to upgrade the continuously boggy section of the road east of Governors Chair using logs as the foundation and discovered this freshwater spring. He didn’t complete the contract and the road collapsed making the route more difficult to use. 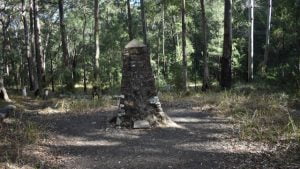 The Pioneer Graves is a short walk from the day use area next to the Spicer’s Gap Campground. It is believed up to 13 people are buried at the site, although for most there are little or no details.

One of the graves is said to be of Mrs Collins, killed when thrown from the wool dray she was helping her husband cart from the Darling Downs while descending a steep narrow section of the road. The section is now called Mother Collins’ Pinch. The tiny grave next to Mrs Collins is said to be that of her child also killed that day.

A cairn is in the centre of the site, built by Mr Harry Johns in 1932 with the help of his sons and the Ipswich boy scouts. A plaque at the base of the cairn reads;

To honour Harry Winifred Johns the discoverer of and a frequent visitor to this cemetery. He built this carn in 1932 to preserve a part of our history laid to rest here. Erected by The Royal Historical Society of Queensland 15th October, 1967.

Tacked words are written around the cairn on the sides;

This cairn is raised to the memory of the unknown pioneers who sleep here. “Till the day break and shadows flee away”

His flock shall dwell securely in the wilderness, and sleep safe in the woods.

Fear not little flock: for it is our father’s good pleasure to give you the kingdom.

The Latin words translated by Google is “The cause of death of them, even of life, keep the memory of the gods, and by way of example, in this respect, these dreaded rocks raises”. The last word ericuntur didn’t translate, but raises seems to best fit from what I could work out. Eriguntur translated to exalts (raise to a higher position).

There are some information boards providing some information. One has details of the graves in a cursive script writing and is difficult to read with the weathering. It says the following;

John Collins, husband of Mary, son of John and Margaret Collins, died 14 August 1856, under a dray on the range near Cunningham’s Gap. Buried 16 August 1856.

Alfred Moss, killed when he and his wife and three children were reported to have been attacked by Aborigines. He is presumed to be buried here.

Edward Moss, son of James Moss, died about 1856. Relationship between Edward and Alfred is unknown.

The day use area where the short walk to the Pioneer Graves begins has picnic tables, wood BBQs, and a toilet block. It is a short walking distance from the Spicers Gap camping area. 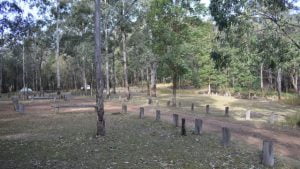 The Pioneer Graves day use area is within easy walking distance with toilets in between. There are no BBQs in the camping area, but there are wood BBQs and picnic tables in the day use area.

There is plenty to do at the Spicers Gap section of Main Range National Park, and can easily fill the day, especially if the Mount Mathieson Trail is undertaken. There are stunning views and interesting pioneering history, making this area a great place to visit.

Heading south on Cunningham Hwy 4.2kms after Aratula turn left into Lake Moogerah Rd. Follow Lake Moogerah Rd for 5.8km and turn right into Spicers Gap Rd at the brown sign for Governors Chair Lookout. Follow Spicers Gap Rd for 2.8km where a brown sign for Spicers Gap will be seen. Continue straight ahead with the road becoming gravel, and shortly starts to steepen and become windy. Keep following the road for 3.9km to reach the camping area. Pioneer Graves is 100m further on. From the camping area, Moss’ Well is about 1.6km further on, and the start of the Heritage Trail is 2.1km. The road is accessible by 2wd but can be slippery in the wet. The road after the camping area may be closed in wet weather or other situations and may not be suitable for 2wd in wet weather.

Toilets: Yes, at camping area and pioneer day use area only

Tables: Yes, at day use area and start of Heritage Trail

Seating: Yes, at day use area and start of Heritage Trail