Hurdle Gully Lookout is near Monto in the Coominglah State Forest, looking from above the gully and across the valley of Three Moon Creek. When it rains the locals would say here comes Hurdle, as it hurdles everything with four feet of water.

The Hurdle Gully Scrub below the crumbly sandstone cliffs it is sheltered by is protected from regular fire and combined with the red soils from erosion supporting a different plant community to the surrounding area.

The gully has 18 known threatened species, 10 animals and 8 plants, and is classified as an Endangered Regional Ecosystem since 1999.

Hurdle Gully was a logging area for 70 years, mainly for spotted gun, Gympie Messmate, and narrow-leaved Red Ironbark. During WWII, Italian prisoners of war were put to work in the forest and housed in barracks.

The foresters understood the conservation value of Hurdle Gully so unlike many similar vine thickets, it was spared from clear-felling.

The lookout has a couple of picnic tables in a cleared area and a retaining stone wall for the lookout. There are some parking spots beside the road but not many, although we were the only ones there so it wasn’t a problem parking.

There is another spot about 600 metres or so before reaching the lookout that has a short walk to the cliffs where a better view is had. This spot is more dangerous however as there is nothing to keep you from the edges and it isn’t apparent the edges jut out from the cliffs with a thin bit of rock that could crumble if stood on.

The road in from the highway between Monto and Thangool is dirt and some sandy sections. It was in good condition, although low 2wd vehicles may have clearance issues and best only attempted in dry weather.

We didn’t drive the other routes that can be taken. Queensland Parks website describes them as being 4wd only and not maintained to the same level. We didn’t have the time to explore further but would like to if we are in the area again.

As a circuit drive, you could continue along Davies Road after the lookout, turn left onto Scrubby Road, then left onto Hurdle Gully Road to return to Monto or right onto Hurdle Gully Road through the southern part of Coominglah State Forest to Abercorn. Another circuit is to turn right onto Scrubby Road and follow the less maintained roads up to Roths Road (see the state forest map).

The rest area at the entrance of the state forest has toilets, sheltered picnic tables, and bins. It is often occupied with travellers, some who stay regularly for weeks so are semi-permanent with their setups. Council workers were cleaning while we were there and said there are never any problems and they regularly clean and maintain the facilities. 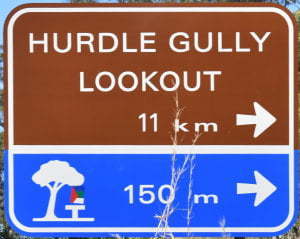 The rest area is near the entrance to the state forest when coming off Burnett Hwy.

Hours: Anytime, walks should be during daylight hours only for safety

Toilets: Yes, at the rest area only

Bins: Yes, at the rest area only