Located near Oakey, the Australian Army Flying Museum displays include a variety of aircraft and army artefacts and memorabilia.

The aircraft are from many eras of aviation, from pre-WW1 full-size replicas of the Box Kite aircraft.

WWI aircraft include the Sopwith Camel and Fokker DR1 Triplan, famed by the Red Baron.

Most of the army aircraft on display are helicopters. The first to enter Australian Army service was the Bell 47G in 1960, a light observation helicopter. The Bell 47 is best known in television from the M.A.S.H. series. On display is a Sioux G3B-1, one of three versions of Bell 47G used by the Australian Army.

The first battlefield helicopter for the Australian Army was the Bell UH-1H Iroquois, the familiar chopper first seeing combat in the Vietnam War. The original designation was HU-1 where it got its ‘Huey’ nickname. The HU-1 designation was changed to UH-1, the Huey nickname stuck.

The largest aircraft on display in the museum is the Boeing CH-47D Chinook, an upgraded model from the original CH-47C first acquired by the Royal Australian Air Force to support the Army to transport troops, artillery, ammunition, fuel and other supplies. 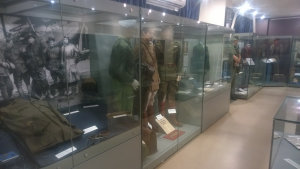 The Chinook is the only aircraft you can enter. The rear cargo door is open to walk into the cargo hold. Walk up to the front of the hold, and you can peer into the two pilot cockpit.

A separate room on the side contains the memorabilia and artefacts display, from the inception of the Australian Flying Corps through to today, including uniform displays from different eras and types.

From the Warrego Hwy, turn into Oakey Pittsworth Rd at the Aviation Museum sign. After 1km turn left into Campbell St. Follow Campbell St for 2km, and turn right into Davidson St to cross the railway line and continue to the right. Davidson St will curve to the left and become Beale St. After 1.5km, turn right into Corfe Rd and follow for 1.9kms. Turn left into the entrance of the museum, Museum Drive, with the museum 500m ahead.