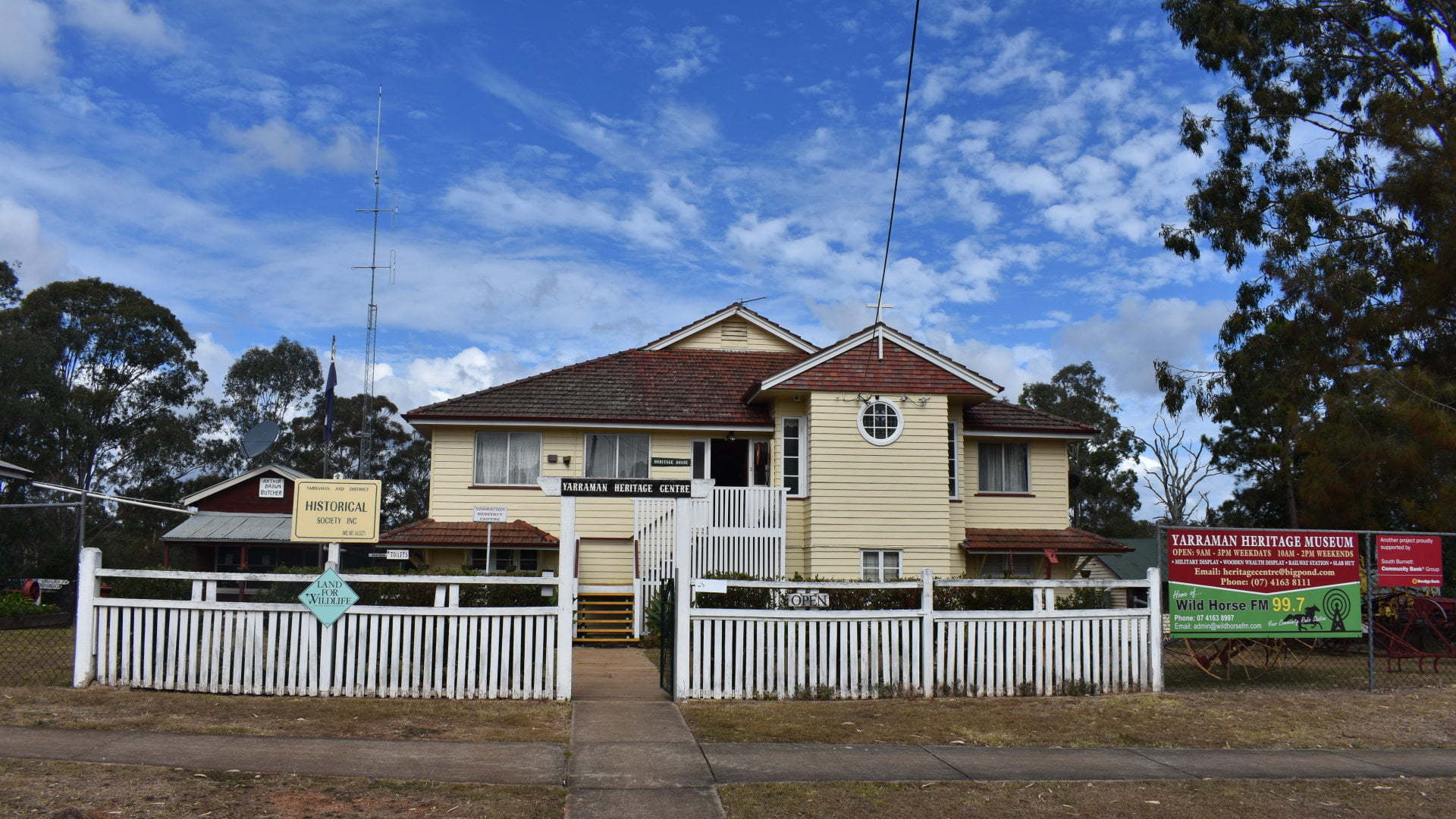 Heritage House in Yarraman is a museum, information centre, and the home of the original Yarraman train station, near the end (or beginning) of the Brisbane Valley Rail Trail (see the Blackbutt Rail Trail

The Heritage house was originally built as a convent in anticipation of Australia being invaded in World War II, but the war ended by the time The Sacred Heart Convent was completed in 1945. 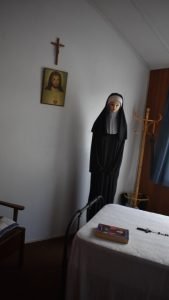 The Sisters of Mercy took over the convent and opened it as a boarding school for boys in 1946 and continued through to 1966. One of the original boarding bed and mattress is displayed in the museum.

Over the years afterwards, it also operated as a Nun’s retreat, a safe house for women and children, before being handed over to the Aboriginal sector of the Roman Catholic Church in the late 1980s. Aboriginal people used it as a halfway house for a few years and then deserted and falling into disrepair.

The Yarraman and District Historical Society acquired the building and transformed it into a museum. Updates continue to restore the building, with a grant for new front stairs in 2014, and repainting and other external repairs in 2018.

The Heritage House building contains the main part of the museum collection, with a tightly packed display, collated in basic themes. The collections have predominately come from locals and their families donating things to the museum or acquired when the opportunity arises. 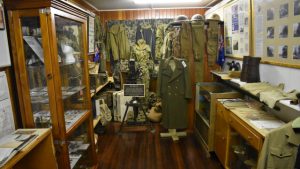 The first section is military based, with various rifles, uniforms, documents of all sorts, and other bits and pieces such as two Dead Man’s Pennies, blackout motor vehicle headlight covers, helmets, and more.

The next room has a variety of items, starting with the witness box, magistrate’s bench, and prisoner’s dock from Yarraman Court House when it closed. There are bottles from Avon merchandise (which ceased operating in Australia in 2018 after 55 years), bank coin counter, cameras and photo enlargers, and Singer sewing machines, among other things.

There is a room dedicated to the electrification of Yarraman. Yarraman first had electricity generated in 1939, when Mr Budgen built a powerhouse to supply the town and for Blackbutt. The powerhouse operated until 1954, with a rebuild in 1951 after a fire destroyed the powerhouse. On the plus side, the children were treated with free ice-cream from the shopkeepers. 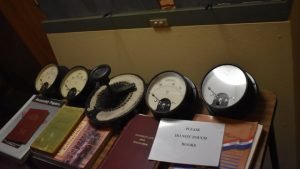 The room has information boards and newspaper articles around the room, and a model of the powerhouse. The museum volunteer taking me around told me Mr Budgen’s son became Yarraman’s electrician, and he uses him for all his electrical work.

An item that looks rather unassuming is a plastic wireless radio that was used by Mr Cook in the local barbershop. Above the radio is a newspaper article of police raiding his shop for running a betting house. The radio was used to gather information on racing.

The museum wouldn’t be complete without something representing the timber industry that Yarraman was established on. Samples of the different types of wood are shown, and you are invited to touch and feel them. Information boards describe the process of felling, handling, and milling the timber. Various oddments of timber tools are laid out, along with and a harness for a bullock team used to haul the timber.

Upstairs of the Heritage House has some more items on display, and a Nun’s cell set up as it would have been when it was a convent. The local radio station, Wild Horse FM 99.7 is operated from one of the rooms. This and a few other rooms are closed off from access. 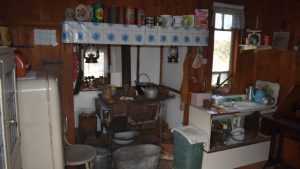 Outside beside the house are bits of farming equipment around and a slub hut. The slab hut has been set up to appear as it would have been like, with a cast iron wood stove, kitchen cabinet, and a single bedroom where everyone slept together in the same room.

We then went to the cream shed, where there are dairy related items, including bottles, milking pale, butter churners.

Another slab hut, more rustic than the first, was a farm storage shed built in the early 1920s at Nukku (just outside of Blackbutt). Slabs needed to repair the hut were sourced from a slab house that used to be near the Upper Yarraman school.

This hut has old tools such as axes, forks, and traps, as well as a couple of meat safes. A shaving cabinet made from an old oil tin sits on the wall. 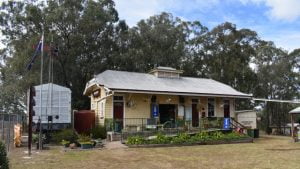 The final building is the old Yarraman train station building, relocated to Heritage House from its original site. The building contains a collection of railway items, old lamps, photos, and information on the history of the railway. A cream carriage sits beside the building also.

The railway station building also contains the information centre for Yarraman and a starting point for the Brisbane Valley Rail Trail. Station Park is a short way up the road, the site where the railway station came from, only the Yarraman railway sign remains.

Yarraman is the start of the Brisbane Valley Rail Trail through to Ipswich, the first section is 18km through to Blackbutt. The start of the trail is at Station Park, which is found by continuing further along Millar St.

Coming into Yarraman from Blackbutt on D’Aguilar Hwy, 250m after crossing Yarraman Creek coming into town, turn right in to Browne St at the brown sign for Heritage House and Museum. Follow for 400m which becomes Millar St, with Heritage House on the right.

Coming into Blackbutt from Nanango on D’Aguilar Hwy, continue for 700m and turn left into Browne St just passed the Royal Hotel at the brown sign for Heritage House and Museum. Follow for 400m which becomes Millar St, with Heritage House on the right.

Wheelchair accessible: No, except for access to information centre