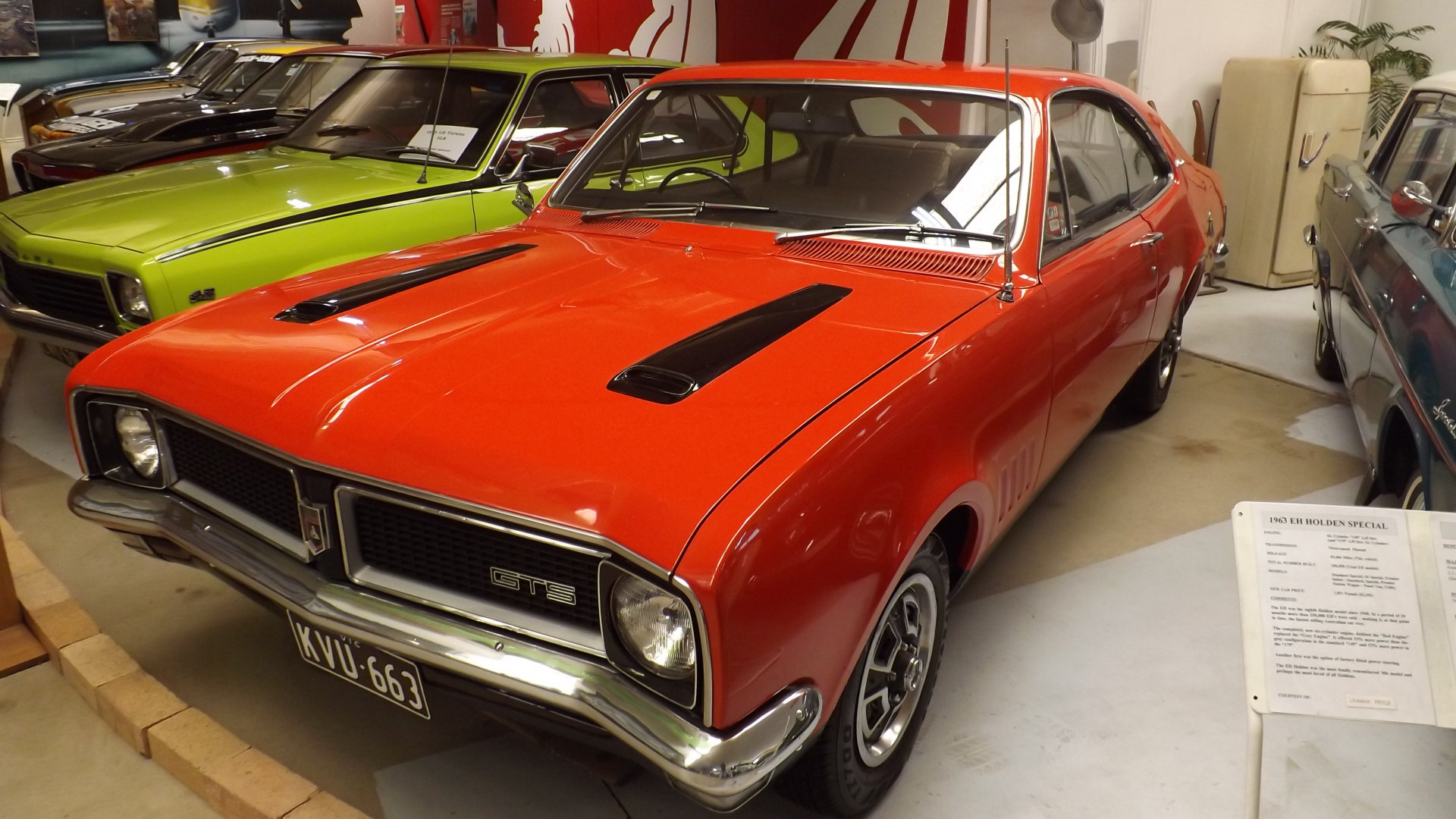 As Australian as football, meat pies, kangaroos and Holden cars! You can appreciate all these in different ways, but some ways are better than others. Watch the football on TV or head to the game at the stadium, have a four and twenty at home or drop in to Yatala Pies, and watch an Attenborough video about kangaroos or head to Australia Zoo.

For Holden cars you can’t go passed the National Holden Motor Museum in Echuca to appreciate the history and progression of Holden cars and their place is Australia’s automotive history. 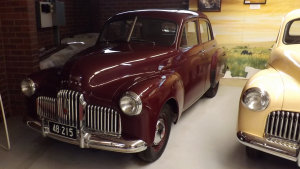 The first Holden manufactured in Australia in 1948 is the Holden 48-215, also known as the FX Holden. The FX was followed up by the FJ Holden, which became the country’s most popular vehicle, even though it was more or less a facelift from the FX. The museum has a sedan and ute of both the FX and FJ Holdens.

Examples of the “Grey Motor” era continue through the FE Holden, FC Holden, FB Holden, EK Holden, EJ Holden, and EH Holden are on display, with a mix of sedan, utility and wagons.

The EH Holden started the “Red Motor” era, offering up to 53% more power than the old grey motor. The EH Holden was a popular model, with over 250,000 sold in 18 months making it the fastest selling Australian car at that time. 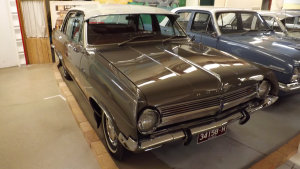 The followup to the EH Holden starts with the HD Holden, the first production Holden to top 100mph (162km/h), and the first to have disc brakes. Then the HR Holden, the 3rd biggest selling Holden (the EH is the 2nd biggest).

The 1960s Holdens continue with the first of the Holden Kingswood, a 1969 HT Holden with the Australian made 308 V8 red motor introduced with the HT Holden. The HG Brougham shows the longer bodied version, introduced to complete with the Ford Fairlane, with luxury features like power windows, air conditioning, reclining front seats, a push button transistor radio with power aerial, and a factory fitted clock. The Brougham name was replaced with the more well known Statesman with the HQ.

The 1960s Holdens wouldn’t be complete without the Monaro coupe. Introduced with the HK Holden in 1968, the museum has a HG example with the 6 cylinder 186S engine. It isn’t as exciting as the 224kW 350 Chev engine at the top of the engine choices, but it still has the beautiful lines of the Holden coupe, complete with “go faster” bonnet scoops and fender gills. 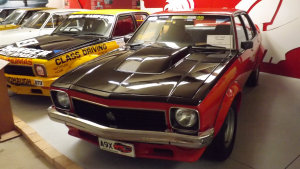 The first Holden Torana, the HB released in 1967 completes the the 1960s era with a 2 door the only option until and update the following year added a 4 door. The HB Torana in the museum is the 2 door.

The 1970s Holdens have the more familiar Kingswood and Torana models. The Torana’s are represented mainly with V8s. The LH Torana with a 4.2 V8 is the most modest example, sitting next to the LX Torana A9X, and a LH Torana SLR/5000. 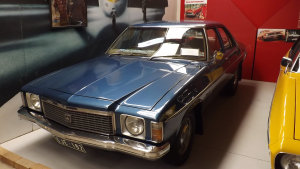 The HJ Holden was the updated successor of the HQ. The blue HJ Holden Kingswood at the museum has movie credentials, used in the Australian movie Charlie & Boots. The vehicle is shown in courtesy of Shane Jacobson who starred in the movie along side Paul Hogan. A signed number plate “Charlie and Boots” sits on the dashboard.

Another HJ is a prototype of the Statesman. It has Cadillac style features, the most notable is the square headlights instead of the round lights used in the production model. A HZ Holden Sandman panelvan also sits on display. The Sandman name was used on panelvans and utes.

The 1980s had a major change for Holden cars. A WB Holden sedan was planned, but was only released as commercial vehicles and the larger Statesman. The smaller Commodore introduced in the late 1970s took the role of Holden’s family sedan, and introduced the “blue motor”, which was largely based on the red motor.

There are more Commodore models missing from the collection than the earlier Holden models. A Holden VH Commodore SL/E is the first example from the squarer shaped models. The Holden VL Berlina, a kind of in between generation of Commodores that ended the Holden made 6 cylinder engines to use a 3.0 litre engine sourced from Nissan. 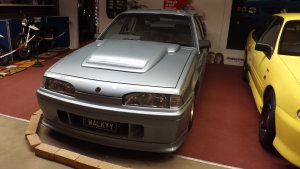 The Holden VN Commodore started the rounder shaped Commodores, and introduced the Buick V6 engine, eventually building the V6 in Australia along with the continued Holden V8 engine. The Holden Motor Museum has an interesting VN Commodore in their collection – a HSV convertible prototype. It was updated with VP front end styling with 125 planned to be built, but never made it to production. 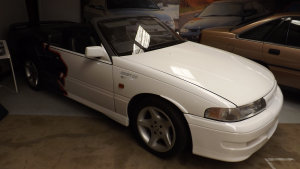 Another concept vehicle is the VY Maloo Cab Chassis, a proposed revival of the Holden 1 Tonner that was last seen with the Holden WB nearly 20 years prior. Unlike the old 1 tonner and unique among cab chassis in general, body panels sit under the tabletop with the rear lights integrated into it. This vehicle like the convertible didn’t make it to production.

A one off built Holden VU Mambo Sandman ute is on display. When a Holden Sandman concept car was announced in 2000, some wondered if a panelvan was being revived. The VU Mambo Sandman wasn’t released. The Sandman name did eventually make it back to adorn the sides of a Holden 15 years later in 2015 with the Commodore VF ute and sportswagon.

The third generation of Monaro coupes are well represented at the Holden Motor Museum in Echuca. The first is literally the first production Holden VX Commodore CV8 Monaro from 2001. 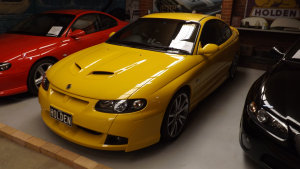 The Holden Monaro production ran through to 2005 with the Holden VZ Commodore, but continued into 2006 with HSV without the Monaro name. Sitting beside the CV8 is a 2006 HSV GTO Coupe with a 297kW V8 LS2 6.0 litre engine.

The third generation Monaro was exported to South Africa, United Kingdom, and America. The American version was sold as the Pontiac GTO with a different grill front to adopt the Pontiac styled nose, and introduced hood scoops which were adopted into the Australian models. A development evaluation vehicle used at Holden’s Lang Lang Proving Ground sits next to the HSV GTO. It has the redesigned nose, but doesn’t have the hood scoops. A 2004 Pontiac GTO Coupe. Over 40,000 were produced and exported for the USA market.

The lowest powered Monaro at the museum would have to be the Holden Monaro CV2, a pedal powered mountain bike complete with dual headlights.

Another HSV vehicle of note in the museum is the 1996 Holden VS GTS-R. The GTS-R stood out when it was released, available only in a bright yellow, GTSR decal on the sides, and a big wing spoiler on the back. It’s engine, still based on the Holden built 5.0 litre V8, was stroked to 5.7 litres to produce 215kW of power (the 5.0 litre HSV engines was outputting 185kW at the time). 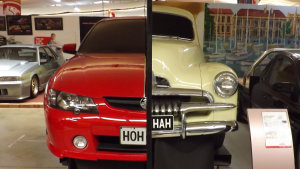 The museum provides an interesting progression of the history of Australian built cars from Holden. To demonstrate the evolved span of the Holden car, a half and half display has been created from an FJ Holden and a VT Commodore. Made for the 50th Anniversary of Holden, each half sits either side of a mirrored divider. As it spun around the half vehicle appears to become complete, then the half of the other becomes visible and it appears to be complete.

With the last Australian built Holdens ending in 2017, the museum captures an era of automotive manufacturing in Australia over a 69 year span. Holden cars are no longer Australian built, but we still have our football, meat pies, and kangaroos.

If coming toward Echuca along Murray Valley Hwy heading West, turn right into High St 280m after the railway crossing. Follow High St for 2.4km, and turn left into Warren St at the roundabout. The National Motor Museum is 50m on the left.

If coming toward Echuca along Murray Valley Hwy heading East, turn left into Warren St towards Echuca City Centre. Follow Warren St for 2km, and the National Motor Museum is on the right before the roundabout.

Food: No, but cafes short walk away

Wheelchair accessible: Yes, assistance will be needed to enter the building with three steps