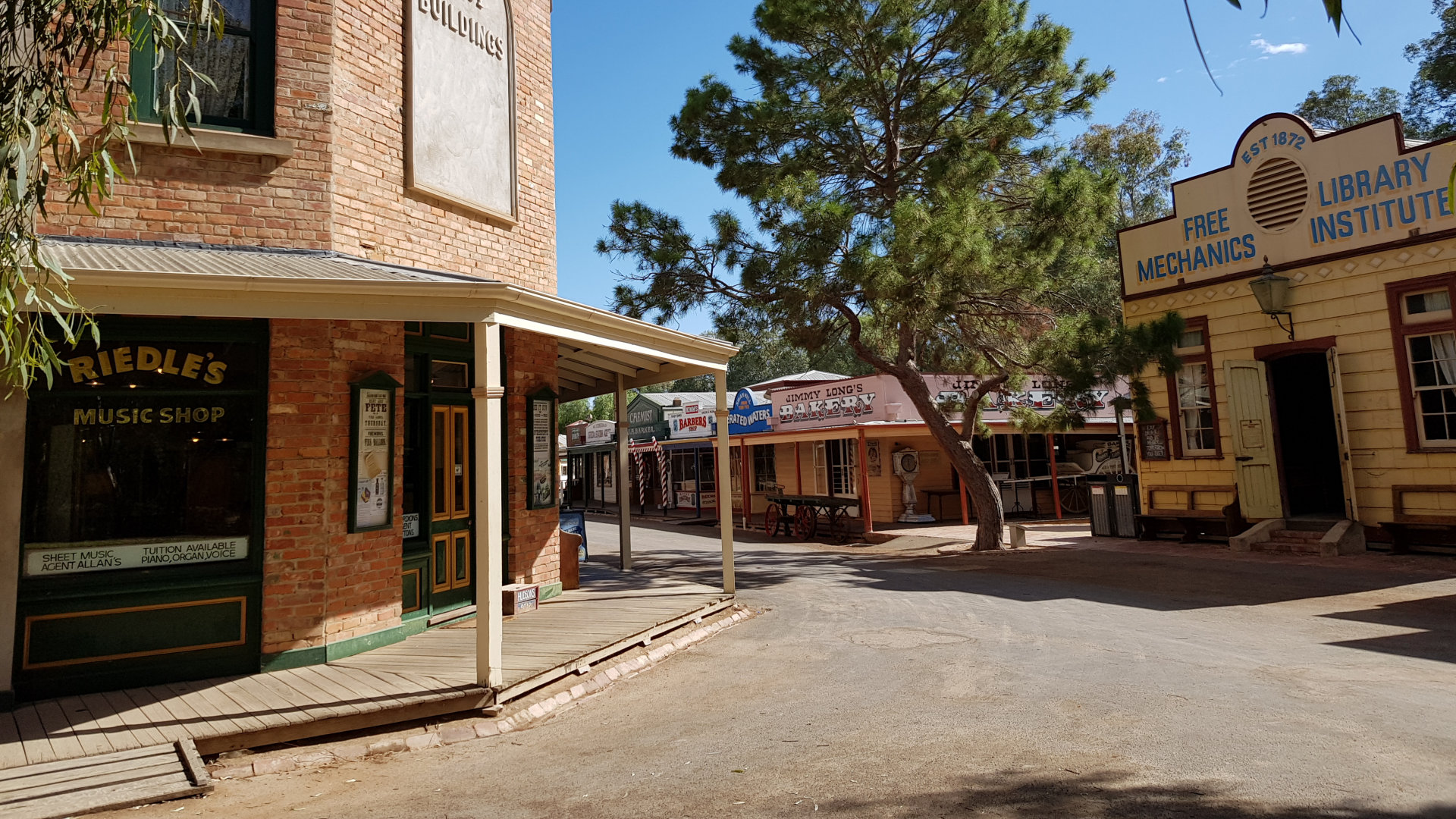 The collection is impressive, with things donated or found from various sources. There is plenty of old farming machinery used many years ago. There are various tractors showing the progression of tractors over the years.

There is a 1909 Marshall combustion engine tractor, still built like the outgoing steam engine tractors were. The Lanz ‘Bulldog’ tractor was built from 1921, and had a single cylinder two stoke engine. The engine size started as 6.3 litres, but grew to 10.3 litres during its life. Its simple design made it cheap to manufacture and to run.

The Furphy water cart was created by blacksmith and wheelwright John Furphy. They were used during the First World War to supply water to the soldiers in the trenches. The drivers of the water carts told the soldiers news from place to place, but the news was not often reliable. Telling a Furphy became a term used for rumours and gossip. The Furphy was also known for its end plates having positive messages, such as “Good – Better – Best. Never let it rest till your good is better and your better is best” 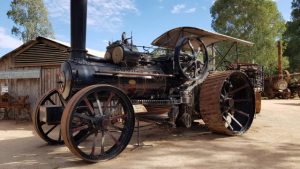 ‘Black Bess’ is a 1920 steam powered ploughing engine. It looks like a tractor, but it isn’t designed to pull with its wheels, instead using a winch cable to pull a plough across the field, and another would be at the other end to pull it back. The goal was to be able to plough eight aches per day to increase the production levels of a farm, ending up being able to plough twenty two acres per day.

There are other steam powered traction engines, but Black Bess is the pride of the steam engine equipment. Other farming equipment on display include ploughs, a winnower (separate grains from the husks), seed drill, a hay binder, and many other things.

The town has numerous buildings, showing different aspects of pioneer towns, as well as different methods of building materials. There is an example of a mud brick construction dwelling, an easy and cheap material. Mud brick became less common once baked bricks and milled timber became more available. Other buildings use timber slabs, corrugated iron, or brick.

Inside the dwellings are decorated with furniture and belongings that you would expect to find in them. The mud brick home had more basic and rustic belongings, cast iron pots with a pot crane to swing them over the fire. The belongings become more refined in other buildings, including cloth wall coverings and curtains. 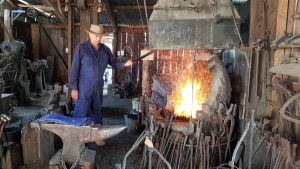 The shops in the main street are similarly filled, themed with the type of store it is. Volunteers at Pioneer Settlement help out with the operation of some of them so they are not just displays, but let you interact and talk about the history with them. We enjoyed our time talking to the blacksmith and listening to his wealth of knowledge of all the farming machinery. 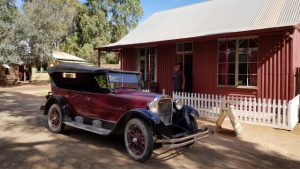 Volunteers operate the 1920s Dodge vintage car, and the horse drawn carriage that you can go for a ride in. The rides are free with entry into Pioneer Settlement, just wait for your turn outside the Saddlery.

You can also opt in for a one hour cruise on the paddlesteamer, PS Pyap. The Pyap was built in the 1890s, and operated as a floating store selling to settlers and settlements along the Murray River. The Pioneer Settlement fitted a diesel engine, put in a steel hull, and replaced the decking with red gum, keeping the original shape of the boat.

The cruise takes you passed the Murray Downs Homestead. The homestead is a private residence, but can be seen from the water. We didn’t opt for the cruise because the cruise is not included in the entry and we went on a paddlesteamer cruise earlier in the week at the Historic Port in Echuca 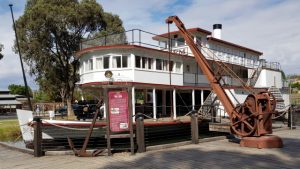 If you don’t go for a cruise you can still go to the paddlesteamer PS Gem and wander through its decks. While not an actual cruise, it lets you have a look at a paddlesteamer. PS Gem was built in the 1870s, and upgraded for passenger service in the 1880s. It had a dining room, passenger accommodation, a smoking room on for men on the top deck, and a music room for women.

The Echo Printing Office has a collection of printing equipment, including letter blocks used to spell out the words and etched pictures to make a negative image to print from. Some of the printing equipment is used to print posters and tickets for the Pioneer Settlement. For a souvenir, you can get a wanted poster made with your name. 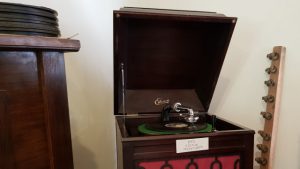 Follow the sounds coming from the music shop, and find instruments and music players, some are both in one. There is an old barrel organ from the 1890s used for entertainment at carnivals, and a pianola proving even those without musical talent can pump out a tune with the punch cards. There is also an Edison phonograph from the 1910s with a stack of real thick Edison records.

The Edison phonograph is interesting in that it is different (and incompatible) to others. Its needle moves vertically up and down in the groove instead of horizontally side to side to produce the sound. The telltale design (other than the thick records) is the diaphragm near the needle is flat with the record, instead of upright with others.

At night time the Pioneer Settlement comes alive with their recent addition of the Heartbeat of the Murray. It uses lasers and lights shown onto water as the screen. We saw a similar thing many years ago in Warrnambool at Flag Staff Hill, but this one is more up to date and advanced. Talking to a volunteer, Pioneer Settlement is the first to have the laser light show on a natural river. They also told us Warrnambool has updated theirs too. The light show is an additional attraction to the entry of Pioneer Settlement, although it is available in a package ticket including entry and a cruise.

If coming into Swan Hill from the North along the Murray Valley Hwy, on approach of the large roundabout, take the first exit veering to the left. After 1.4km, turn left at the next roundabout into McCallum St, and then immediately right (50m) into Monash Drv with the brown sign. Continue for 1.3km, and turn left into the parking area for the Pioneer Settlement.

Seating: Yes, along street and in hotels

Wheelchair accessible: Yes, some parts are not accessible