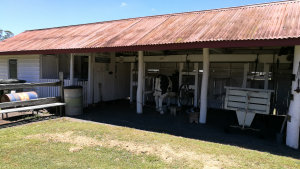 Murgon’s first house built by the Nutt Family in 1902, is furnished to the 1900’s era. It is called Castra which means Our Camp. The rooms of the house have been decorated in ways that were typical at the time, such as using a curtain across the corner of the room as a wardrobe.

The Murgon Museum Chapel was originally the Holy Spirit Anglican church from Hivesville, built in the early 1930’s, and is still used for wedding ceremonies. Above the altar is a glass mural featuring a lily covered pond, which is the aboriginal meaning for Murgon. Just outside the chapel is the outhouse, with Confession Box written above the door. 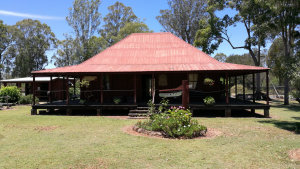 An original slab house built in 1893 is made entirely from crows ash timber and gives a feel of what it was like in early days, named Trinity. The rooms have musket holes to allow shooting from the inside when being attacked. The inner walls are made of hessian, and with a large family (7 children?) there were only 2 bedrooms. The kitchen was a separate building, common to ensure hot fires are kept away from the main house.

A house donated by a local in Murgon and relocated onto the museum grounds is full of various items, from phones of all kinds, typewriters, clothing, sewing machines, cameras, clocks and many more things. 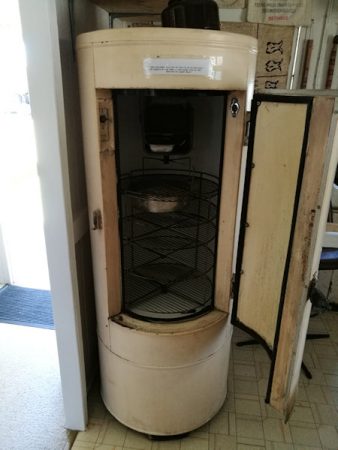 Something I had never seen before was a Rotafrig, a cylinder-shaped refrigerator with rotating shelves – nothing can get lost at the back of the fridge. It is one of only 30 to 40 ever built by Kirby’s in the 1930’s.

update: Talking to various people at museums, the Rotafrig is quite rare and unheard of by most, even those who know Kirbys fridges. I haven’t seen any others but Wayne and Bette saw one at Historic House in Charleville

update: I came across another Rotafrig in Tenterfield’s Centenary Cottage Museum. The volunteer spoke of another she used to have many years ago and found it to be a great fridge and convenient to use, but couldn’t say if it was around anymore.

There are other buildings, and new exhibits are continuing to be built. A bakery and blacksmith exhibit has been started. A new functions building has also been started to better cater for events undercover.

A small railway exhibit has a dairy shed where milk is stored waiting for the train to pick it up, signal lights, a short section of track, and a gate that was along the Murgon-Proston line. A dairy carriage insulated with ash and tin has thermometers inside and out. On the day I was there it was 25 degrees outside in the shade, and inside was 17 degrees. Not bad for an enclosed box with a corrugated metal roof in the sun. A similar carriage is at Bundaberg Railway Museum

, except it is insulated with cow hair.

The main collection displays are in the former Bank of New South Wales building, relocated from Murgon. It houses a large gem and rock collection donated to the museum from a collector in the area.

I recommend allowing 2 hours to walk around the Queensland Dairy & Heritage Museum if you like to have a good look at everything. I arrived later than was ideal and didn’t linger at some of the exhibits as much as I would have liked. The volunteer walked around with me and gave some great commentary about the various buildings and exhibits while on her rounds to lock everything up. The brochure mentions about guided tours, but it is best to call prior to make sure they have availability as the museum is operated by volunteers.

From Murgon, head west along the Bunya Hwy, and turn right into Gayndah Rd, with a brown sign ‘Dairy Museum’. Queensland Dairy and Heritage Museum is about 500m on the right.

Wheelchair accessible: Yes, some buildings not accessible, grass between buildings