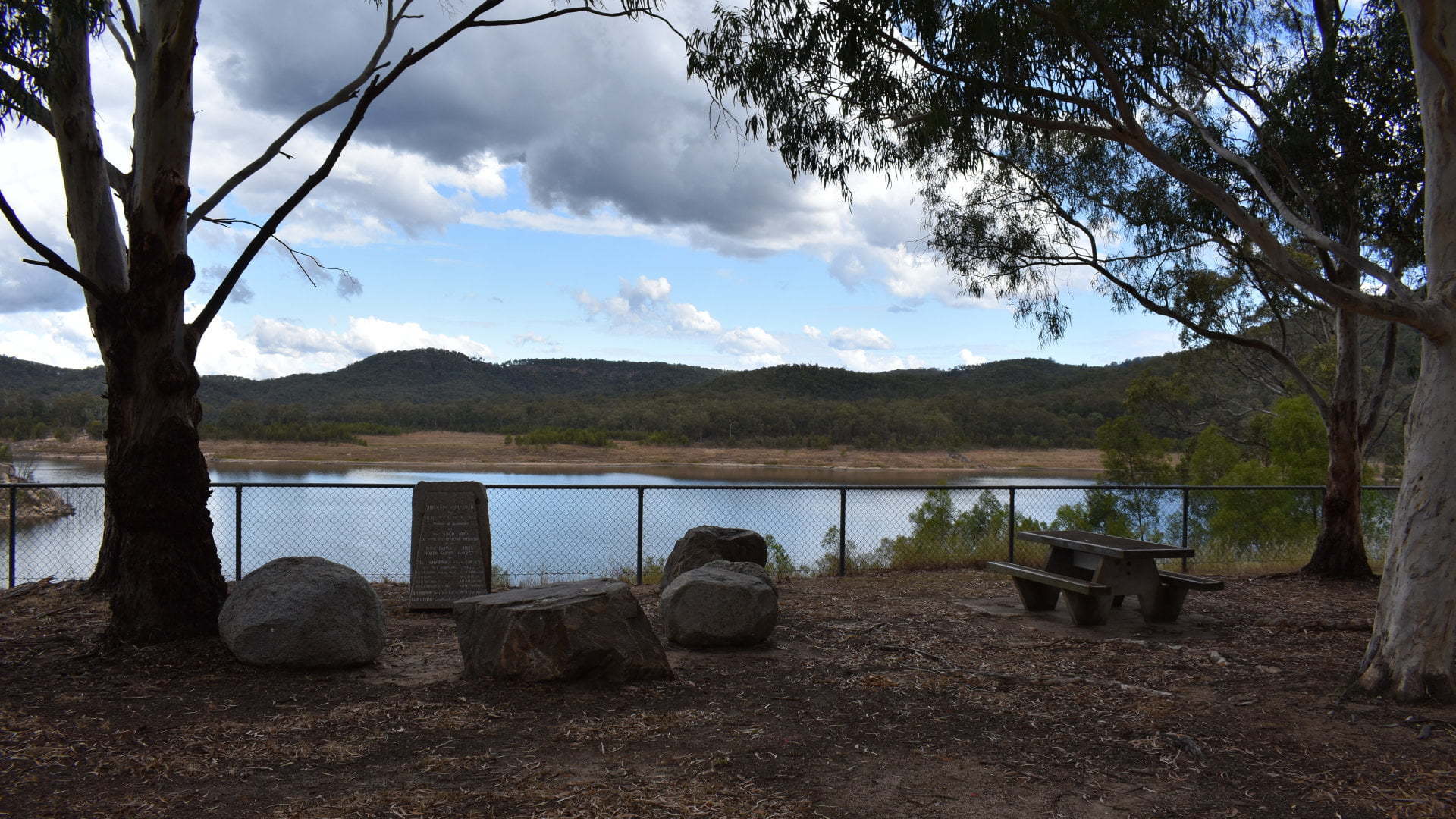 Lake Perseverance is east of Crows Nest, one of three dams that supply most of the water to Toowoomba.

In addition to Perseverance Dam, the other dams are Lake Cressbrook

and Cooby Dam, and up to 15% of the water supply is still from bores, which were the sole source for Toowoomba’s water supply before the dams were built.

Perseverance is a backup supply during high demand periods, capable of holding 310,000 megalitres of water when full.

All three dams are lower altitude to Toowoomba, so water has to be pumped up to the city’s water reservoirs. 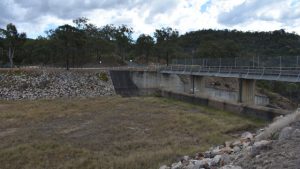 Access to the dam is generally closed off. There are two day use parks either side of the spillway, signed as the Eastern Spillway and Western Spillway Park. The Lake Perseverance Active Recreation Centre

is a separate destination, and not open to walk-in tourists.

The Eastern Spillway looks across the spillway to the western side and out to the lake. There are an information board and a couple of picnic tables and an open grass area. The water levels were quite low so the water was nowhere near the spillway.

The Western Spillway Park also looks across the spillway and out to the lake. At the parking area, there is a single picnic table and a stone plaque detailing the official operation of the Perseverance Creek Water Supply Project by Sir Joh Bjelke-Petersen in 1970. 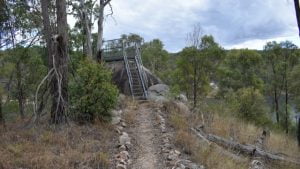 A walk from the Western Spillway Park leads to additional picnic tables and more grass area, about 200m from the parking area. Further on is a lookout platform, but unfortunately, the lookout is too obscured by tall trees growing around it.

Leading to the lookout platform is a tribute plaque on a large rock. The plaque is in memory of to Gerrit Bunk who was fatally injured in 1964 during the construction of Perseverance Dam. 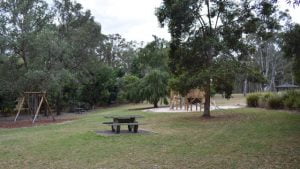 About 350m east of the spillway parks is a better park where the water pump station is located. It offers toilets, covered picnic tables, BBQs, and a playground, although there are no views of the lake. Water is available from this park also but needs to be treated.

The Water Pump Station is a large towering building, near where the toilets are located at the bottom end of the park. There are a couple of windows you can peek inside from, but it is otherwise closed from access.

The park is opposite to the Lake Perseverance Active Recreation Centre

, but is generally accessed when booked ahead.

West of the spillway there is some room to pull over to get a higher view over the lake. There is not a lot of room and is on a steep winding section of road, it is best to be heading west to pull over.

From Crows Nest, go south on the New England Hwy to head out of town, and turn left into Charles St at the brown sign for Lake Perseverance. After 280m, turn right into Perseverance Dam Rd, and follow for 2.3km, then turn left to continue on Perseverance Dam Rd. The Western Spillway Park is on the right after 5.5km, and the Eastern Spillway a further 100m onward across the bridge. The Pump Station Park is 350m passed the Eastern Spillway park. Before the Western Spillway Park at 4.3km, there is room to pull over area for higher views over the lake, however, it is on the opposite side of the road so great care is needed to look for oncoming traffic, and traffic coming behind you.

From Hampton (Toowoomba) heading north along the New England Hwy, turn right into Pechey Forestry Rd (Marion St) at the brown sign for Lake Perseverance. After 3.7km, continue straight ahead, the road becomes Perseverance Dam Rd. The Western Spillway Park is on the right after a further 5.5km (9.2km), and the Eastern Spillway a further 100m onward across the bridge. The Pump Station Park is 350m passed the Eastern Spillway park. Before the Western Spillway Park at 4.3km (8km), there is room to pull over area for higher views over the lake, however, it is on the opposite side of the road so great care is needed to look for oncoming traffic, and traffic coming behind you.

From Esk, head west along Esk Hampton Rd towards Crows Nest and Toowoomba. After 29.2km, turn right into Mcerlean Rd with a brown sign for Lake Perseverance shortly before it, then the first left at 230m. Follow for 500m, then turn right into Mount Jockey Rd. Continue along Mount Jockey Road for 6km, and continue to the left becoming Perseverance Dam Rd. The Water Pump Station Park is on the right after 4km. Eastern Spillway park is a further 350m onward, and the Western Spillway Park another 100m across the spillway bridge. 1.2km passed the Western Spillway Park is room to pull over for higher views over the lake.