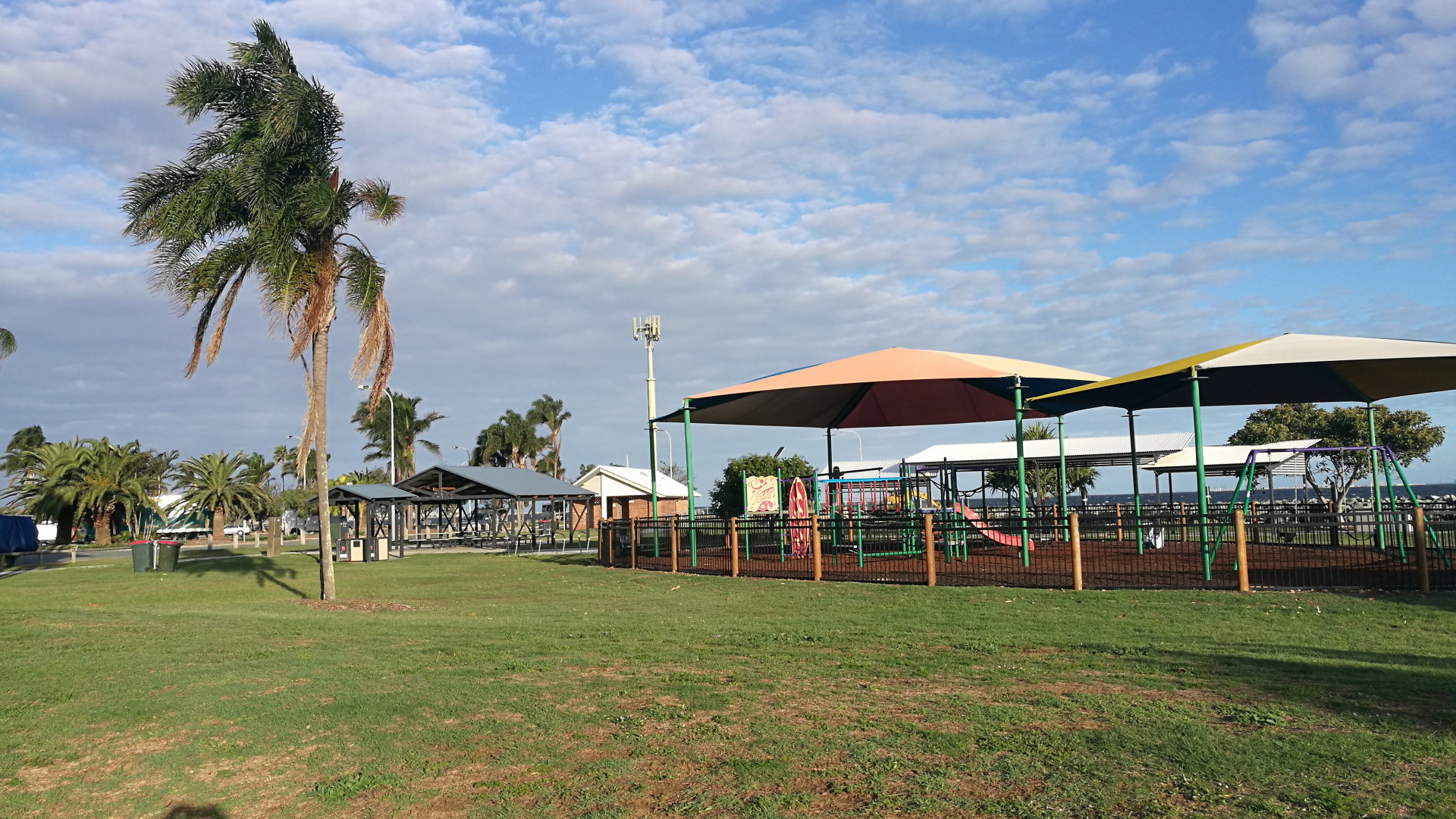 Pelican Park is found in Clontarf just after crossing the bridge onto the Redcliffe Peninsula. The park is quite long with a playground at each end, and the Redcliffe Information Centre at the western end of the park.

The park gets its name from the abundance of pelicans that visit the area. Before the new bridge was built, pelicans would frequently roost on the light poles above the roadway. The kids would count how many pelicans there were whenever we drove over the bridge. While novel for the kids, you dreaded driving under a pelican at the wrong time, the windscreen wipers made things worse before it got better.

There doesn’t seem to be as many pelicans around as there used to be, but the Information Centre has feeding at 10am that attracts them to Pelican Park each day.

Near the Information Centre is a liberty swing, and a larger playground near it. There are two large undercover areas with a number of picnic tables, one right next to the playground, and some free BBQs to cook on.

The boat ramp often has a lot of activity, including fisherman without a boat utilising the rock wall along the length of Pelican Park. The boat ramp was closed while we were there for an upgrade, so there were not so many vehicles with boat trailers parked but there was still fisherman with some lines in the water.

The Moreton Bay Cycle Way runs through Pelican Park and is a popular point start a bike ride across the bridge, or head towards Woody Point staying on Redcliffe Peninsula. 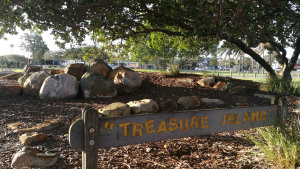 The eastern end of Pelican Park is across a bridge over a creek dividing the two halves of the park. There is a separate entry from Hornibrook Esplanade to access the eastern end, but you can also drive between the two.

In the middle, next to the creek, is a large open oval space. This area is often used by kite flyers on the weekends. It is used for a few events during the year, including the annual Redcliffe KiteFest held during the last weekend of August.

There is another playground with more covered picnic tables and nearby BBQs. The picnic table coverings are older than the western end, and possibly overdue for an update, but they still function.

The eastern end is adjoined by Bells Beach, where jet skis are seen on weekends, and depending on the direction of the wind, a fairly regular skydiving landing spot. Sutton’s Beach is an alternate landing spot that faces in a different direction. 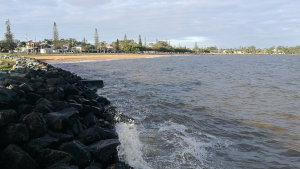 The waterfront offers views across Bramble Bay. The view to the south is of the bridge and across to Sandgate and Shorncliffe, and Brisbane City and the Port of Brisbane in the distance. The view to the east looks across the nearby Bicentennial Park

There are bubblers for water around, but nowhere directly to get some food. There are a fish and chip shop (The Groovy Groper) and a pizza shop (Zorba’s Pizza) across the road, but unfortunately, they are across the rather busy road. OK if you are without kids, but generally it is a tricky road to cross.

There is a set of lights at the eastern end of Pelican Park, and of course, the shops are at the western end. Fish and chips or pizza at the park do go down well though. 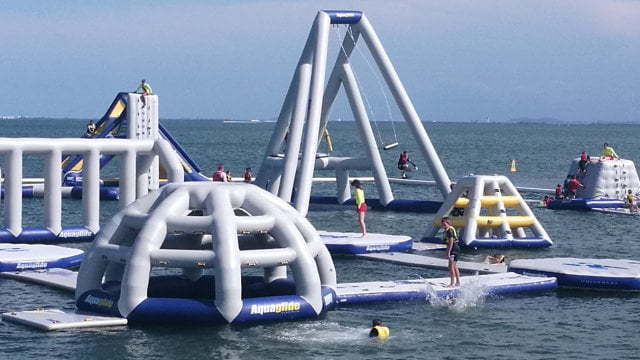 At the bridge where the eastern and western ends of the park are separated, a new water park AquaSplash was added in November 2018.

AquaSplash is an inflatable water park, an interlinked set of inflatable modules as activities and obstacles on the water. It is kind of like a ninja warrior course on water, except you get to finish the course after you fall in.

The modules have things to climb up, climb over, jump from, slide down, and swing from a giant swing to fall off into the water with a splash. The modules are connected with walkways between most of them.

All participants where a buoyancy vest, but you are expected to be able to swim 20 metres in deep water and hold your breath underwater with your eyes open for 20 seconds.

The season started early November. It isn’t clear when the season ends but has been open until the end of April when it operated at the Gold Coast. 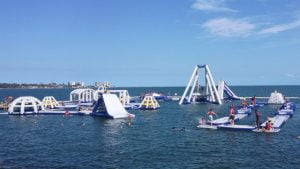 For parents who would like to watch from the sidelines, be aware that children under 10 years must be accompanied by a paying guardian, with up to 2 children per guardian. A guardian is anyone over the age of 16.

The inflatable water park is open in good weather and bad. However, if the wind becomes too strong or there is lightning about then the park closes for safety reasons.

Sessions are 1 hour, which includes induction and getting your lifejacket on. A 2-hour pass is available, which gives better value with more time out on the water.

Coming from north of Brisbane along the Bruce Hwy, follow the signs to Redcliffe. A brown sign to Redcliffe is at the approach to Deception Bay Rd (exit 142). Follow Deception Bay Rd for 7.7km, and turn left into Anzac Ave. Continue straight following Anzac Ave for another 4.1km, and turn right into Elizabeth Ave. After 5km, turn left into Hornibrook Esplanade before going onto the bridge. Pelican Park is 700m on the right at the Information Centre, with a brown sign just before it.

Coming from the south, you can also head up the Bruce Hwy from along Gympie Rd. If you miss the Deagon Deviation exit, you will eventually come to this exit also. Take the exit to Anzac Ave (exit 133), and keep to the right lane to go under the overpass and loop back to Anzac Ave, turning left towards Redcliffe. Drive for 4.8kms and turn right to continue along Anzac Ave. Continue straight following Anzac Ave for another 4.1km, and turn right into Elizabeth Ave. After 5km, turn left into Hornibrook Esplanade before going onto the bridge. Pelican Park is 700m on the right at the Information Centre, with a brown sign just before it.

Food: Yes, fish and chips shop and pizza shop across the road