Skip to content
Due to COVID-19, there have been restrictions in place preventing travel around Australia. Restrictions have greatly eased for travel, however, Brown Sign destinations may still have restricted opening hours or remain closed at this time, any opening hours shown should not be relied upon. Continue to practice social distancing and good hygiene at all times. More information on traveling in Australia

The Stocked Impoundment Permit Scheme is a fishing permit required at stocked impoundments through Queensland. It is often referred to as a SIPS permit.

The permit must be able to be presented on request, carried on person, though it can as a paper receipt or digital as an email or SMS.

Permits can be purchased for the week or for the year.

Visit the Queensland Government page for fishing in stocked impoundments

for information about SIPS permits, costs, and how to purchase. 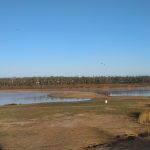 Lake Dyer - Lake Dyer is near Laidley, an offstream storage dam providing water for irrigation, filled mainly from diverted flows from Laidley Creek as demand requires. Named Bill Gunn Dam, it was built as an ungated dam with a spillway for excess water to flow over when capacity is exceeded. The level of water normally varies based ... Read more

Wyaralong Dam - Wyaralong Dam is an ungated dam on the Teviot Brook at the base of Mt Joyce, west of Beaudesert. The dam was intended for potable water use. The dam was constructed in 2010, and began filling in December just in time for the floods bringing it to capacity in January 2011, even though the dam ... Read more

Cania Dam - Cania Dam is located north of Monto and is highly regarded as one of the better dams for fishing, stocked with Australian bass, golden perch, silver perch, and saratoga. As a stocked dam, a SIPS permit is required for fishing, which helps fund the dam to have fish stock added to the dam for recreational ... Read more

Hinze Dam - Hinze Dam is the Gold Coast’s main water supply for drinking water. The dam is ungated, which means the dam fills to capacity, then spills out over the spillway. Named after the Hinze family who first farmed the area, the dam was first completed in 1976, and then upgraded in 1989 to nearly 4 times ... Read more

Maroon Dam - Opened in 1975, Maroon Dam was built to allow expansion of irrigation along Burnett Creek and the Logan River. The dam does not have a gate, so when it reaches capacity water goes over the spillway. The dam at Lake Maroon is open for recreational use, including boating, jet skiing, water skiing (as well as ... Read more 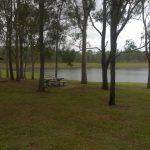 Bullocky Rest - Bullocky Rest is a day use area on Lake Samsonvale, one of Brisbane’s water supply dams, also known as North Pine Dam. There is plenty of space, and plenty of facilities to go with it. When you first enter there are immediately sheltered and unsheltered tables and BBQs. Bullocky Rest is a popular place for large ... Read more
Follow brown signs FacebookPinterestYouTube Channel