Yatala Pies has to be one of the most well known pie shops in Australia, even if you have only seen the brown signs travelling between Brisbane and the Gold Coast. It has such historical significance in Queensland it is on the Q150 list, with the Q150 icon on the brown sign.

Yatala Pies has a long history, their website states over 130 years. Opening in 1914 is often mentioned which makes it a little over 100 years, but I also found mention of it floating down the Albert River in the great flood of 1893.

Once a small shop along the Pacific Highway, it was a landmark break stop for travellers. Like many food stops that had the highway replaced with a freeway/motorway, the Pacific Motorway bypassed Yatala Pies.

They relocated to bigger premises near Exit 38, making it a short detour off the motorway. There is plenty of parking, but not plenty enough on busy days when finding a park can be difficult. There is a drive thru service if you want to remain on the go, although again on busy days the queue can get quite long.

Thankfully, they are well staffed and customers are pushed through fairly quickly. The downside of their efficiency is that you have less time to decide what you want. 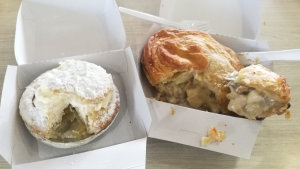 For those who cannot have gluten, your choices are limited with a meat and vegetable pie. The gluten pies are not ready immediately, but can be ready in 10 minutes, or pre-ordered ahead. Gluten free pies are not easy to come by at bakeries, so it is good there is an option there that would otherwise have to miss out or stick to the hot chips.

If you have chosen your pie, picking a sweet can add to the choice dilemma. Choose from apple pie, apricot pie, berry pie, caramel tart, and apple turnover, all with or without cream. Custard tart, custard and apple tart, pavlova, and other slices and cakes add to the choices.

Most of the pies, savoury and sweet, are also available in family size. The family pies are cold/frozen, however they will heat them up for you if you give them notice 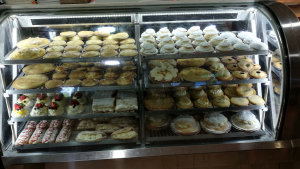 For a sweet pie, an apple pie is a frequent favourite of mine, but I always like cream with it, which seems to be harder and harder to find these days. So apple pie with fresh cream completed my two course pie meal.

If finding cream on an apple pie is getting harder, then finding a pie shop that supplies a free sauce packet is near impossible. There are no free sauce packets are Yatala Pies either, instead tomato sauce is available on tap! BBQ sauce, mustard, and Worcestershire sauce are at a counter, along with salt, pepper, cutlery and napkins.

The pie pastry is fluffy and flaky on top, and the bottom is firmer making it easier to handle without relying on cutlery. The chicken was chunky, and had enough mushrooms through it, and the mornay sauce was not too overpowering for the chicken and mushroom flavours.

The size of the pie is fairly generous, and by the time I finished the pie I realised two courses was more than I needed. The apple pie instead took a journey home for later. The apple pie was delicious also, and the cream satisfied my craving for the oft hard to find apple pie with cream. While I could have done without it, and did skip it for my lunch, it was a pleasing treat in the evening.

I don’t travel the Pacific Motorway too often, but I’m often tempted with a quick detour even when a meal break isn’t really needed. This wasn’t my first visit to Yatala Pie Shop, and it won’t be my last.