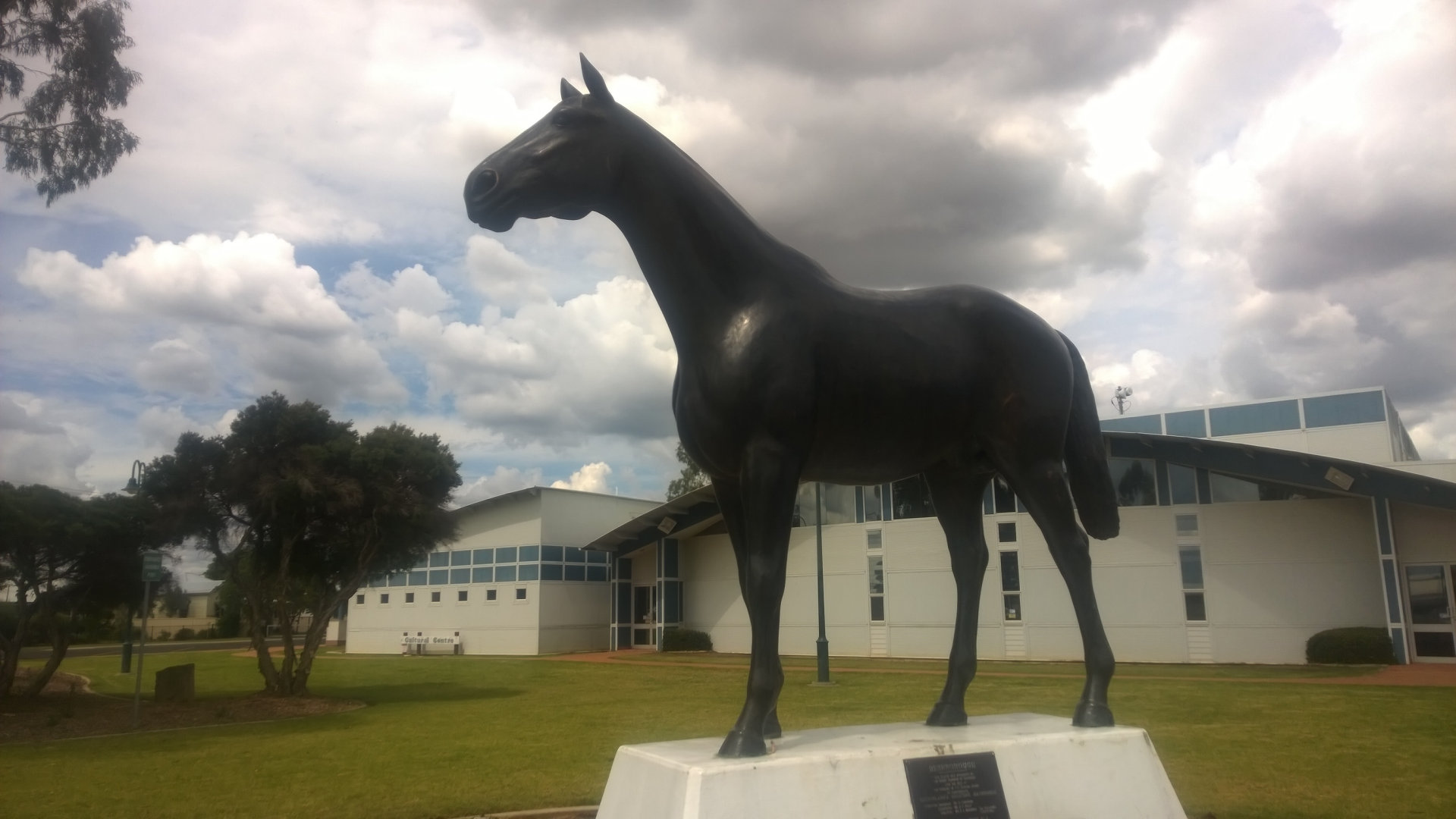 Bernborough Statue is of the Australian bred thoroughbred racehorse in the 1940s, unveiled in 1977. Bernborough was foaled at Rosealie Plains near Oakey.

Bernborough is one of the five inaugural inductees on the Australian Racing Hall of Fame in 2001, along with Phar Lap, Kingston Town, Carbine, and Tulloch.

The plaque on the base of the statue has the following:

By Emborough (GB) out of Bern Maid (Aus)

Bernborough’s early racing was confined to Cliffor Park Racecourse at Toowoomba, where from 20 starts he recorded 11 wins, 2 seconds and 1 third.

Sold to a Sydney businessman in 1945, he recorded 15 straight victories against the best rivals in the land, never with less than 55.5kg on his back, at the main racecourses in Sydney, Melbourne and Brisbane.

He established weight-carrying records in several of Australia’s greatest races and gained the nation’s affection for his ability, intelligence and gentle nature.

Whilst a breakdown in the LKS Mackinnon Stakes ended Bernborough’s brilliant racing career, he became a successful sire at stud in Kentucky (USA).

To read more about this remarkable Australian racehorse and the commemorative statue, call into the Library for a brochure, or log onto Council’s website: www.jondaryan.qld.gov.au

Jondaryan Council became the Toowoomba Regional Council in 2008, and the website went offline some time in 2009. The new Toowoomba Region website doesn’t appear to have a page specific to Bernborough, but is mentioned on a couple of pages.

There is an information panel with audio, however the audio was not working when I was there. The panel contains the following:

One of Australia’s leading race callers and journalists, the late Keith Noud, recounted in his book Keith Noud Recalls:

“Of all the tens of thousands of races I wrote about and broadcast over the years, four were to trigger the gush of heart-thumping emotion. And in one of those drams, as the winning number flashed into the semaphore, I was obliged to reach for my handkerchief.

“The horse concerned was Bernborough in his Doomben double wins of 1946.”

Bernborough won the 1946 equivalents of today’s Doomben 10,000 and Doomben Cup under crushing weights. It was a testament to a great champion that Keith Noud listed two of Bernborough’s wins amoung the four most outstanding wins he saw in his life.

Bernborough’s success at Doomben was repeated in some of Australia’s most important races including the Warwick Stakes, Chelmsford Stakes and Hill Stakes. He ran in the Caulfield Cup but broke down in the Mackinnon Stakes and was eventually sent to stud at the famous Spendthrift Farm in the United States where he died in 1960 after producing two American champions.

Bernborough is remembered every year when the Doomben 10,000 and Doomben Cup are run.

From the Warrego Hwy, turn into Oakey Pittsworth Rd at the Aviation Museum sign. After 1km turn left into Campbell St. Follow Campbell St for 1.1km, the Bernborough Statue is outside the council building on your right.